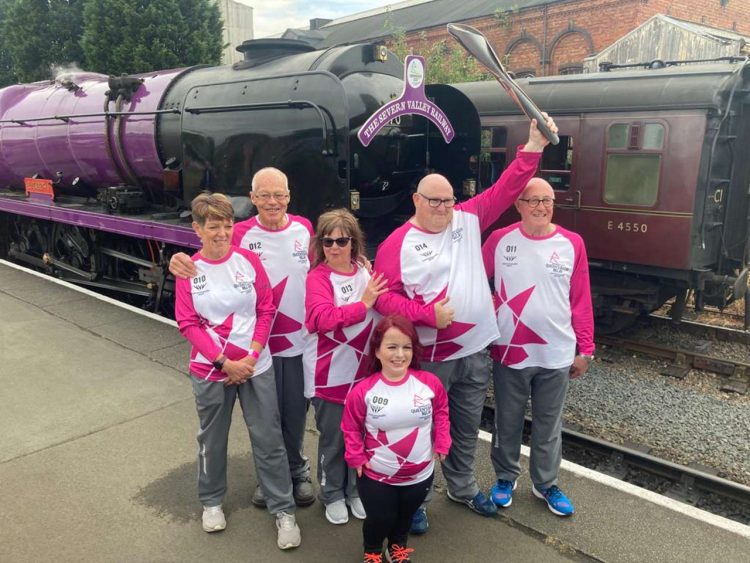 On Saturday morning, 23rd July, the Birmingham 2022 Queen’s Baton Relay for this year’s Commonwealth Games travelled by special train on the Severn Valley Railway (SVR) from Kidderminster to Bridgnorth.

The baton was carried into the station by baton bearer Jess Benyon from Stourport through a guard of honour, made up of many of the SVR’s volunteers. News that the railway was to carry the Baton was announced back in May.

The baton contains The Queen’s Message to the Commonwealth, which was placed inside the baton in October last year. Since then it has travelled around the world, visiting all 72 nations and territories of the Commonwealth. It is now on the last few days of its journey before arriving in Birmingham for the opening ceremony of the games on 28th July.

The special Baton Relay train was hauled by the SVR’s purple-liveried locomotive, No.70 Elizabeth II.

As it travelled along the 16-mile line to Bridgnorth, it slowed to a walking pace as it passed each intermediate station, their platforms crowded with spectators who had come to witness the historic occasion.

Jess is the West Midlands regional coordinator for the Dwarf Sports Association UK and organises sports activities for people with dwarfism, including swimming, multi-sports and outdoor adventure activities. She said:

“It was amazing to carry the Baton on the special Severn Valley Railway train, and I’m so proud to have been chosen for this role.”

“The atmosphere across the whole railway has been joyous. It has been a pleasure to welcome hundreds and hundreds of people here today, and to have played our part in this wonderful community event. And what a fantastic opportunity it’s been for our stunning purple locomotive to shine once again, alongside the Batonbearers who carried out their duties so well.”

This year, the railway’s summer holiday season is appropriately taking its theme from the Birmingham 2022 Commonwealth Games, as it hosts a Summer of Sport. As well as a trip on a heritage train, visitors can take part in a host of fun sports and team activities alongside the SVR’s summer crew at The Engine House at Highley Tickets for trips on the railway and events at Highley can be booked at www.svr.co.uk