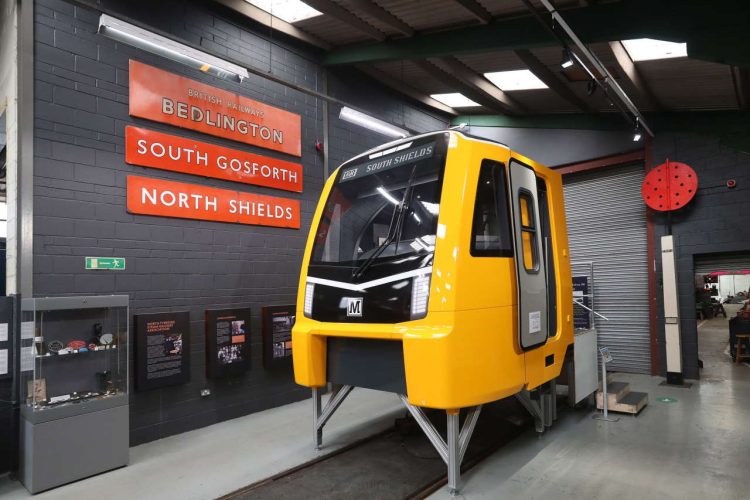 the Metro train mock-up on display at the Stephenson Museum on North Tyneside // Credit: Nexus

At the Stephenson Steam Railway in North Tyneside, a full-sized replica of the new Tyne and Wear Metro train cab has gone on display.

Nexus has loaned the replica to allow the public to get a closer look at the new Metro fleet before the first train arrives at the end of December. The replica was previously unable to be showcased due to Covid-19 restrictions, so was put on display at the museum.

The cab has been visited by over 150 Metro drivers to ensure that the design is of a high standard and is user friendly in terms of comfort.

The trains are set to be in passenger service by 2023 and are being made by the Swiss train builder Stadler. The 46 Metro trains will be brought over to the UK gradually and Stadler will be responsible for maintaining the trains for the next 35 years.

More information on the fleet can be found at https://www.nexus.org.uk/newmetrotrains.

Head of Fleet and Depot Replacement Programme, Michael Richardson, said: “We are delighted to say that the replica of our new train has gone on public display for the first time.

“The Stephenson Steam Railway is the perfect location for this exhibit, and it will make for a great day out while the schools are off.

“We hope that visitors will really enjoy seeing this life-sized mock-up as we countdown to the first real train arriving at the end of the year.

“It gives a fascinating snapshot of what the new Metro trains are going to look like. We certainly think younger visitors will really enjoy seeing inside the driver’s cab and it will help to capture their imagination and inspire them.

“The mock-up is exactly to the scale. It has the same layout as the trains which are being built by Stadler. You interact with the control panels and get a sense scale, and how vastly different the new fleet is going to be compared to the current one.”

Michael Steiner, Programme Director for Stadler, said: “We are pleased that the cab mock-up of our state-of-the-art new trains set to serve the Tyne and Wear Metro will go on public display at the Stephenson Steam Railway. This single piece of kit is an illustration of our core values, including innovation, precision, efficiency, craftsmanship and comfort. It’s fantastic that the general public will be given the opportunity to get a flavour of the new trains, ahead of their introduction into service next year.” In North Tyneside, the new £3 million Metro bridge has now been successfully installed.