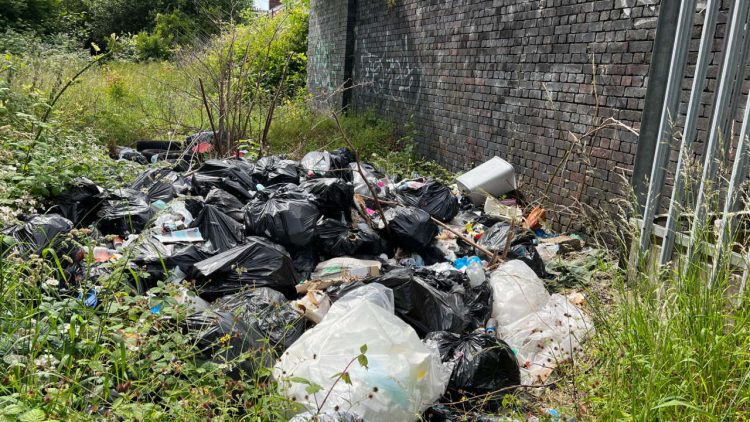 Tonnes of filthy, stinking household waste including a selection of old sofas, mattresses and bikes have been illegally dumped on the disused Preston to Longridge railway line which is close to Skeffington Road in Deepdale.

Across the country, millions of pounds of taxpayer’s money is spent in order to clean up after the criminal dumpers every year. This money could be spent on improving stations and track to bring better journeys for passengers and freight in the North West.

“We won’t tolerate anyone using the railway as an illegal dumping ground and we do everything we can to catch those responsible and bring them to justice.

“Unsightly waste like this near Skeffington Road is a health and environmental hazard. Anyone who sees fly-tipping happening on the railway should immediately contact the British Transport Police.”

“Fly-tipping is a criminal offence and those responsible face prosecution and a hefty fine.

“Dumping rubbish on the railway creates an eyesore and forces Network Rail to fork out to pay for it to be removed. Money that could be invested elsewhere.

“We continue to work with Network Rail combining our many resources to prevent fly-tipping. If you witness or have any information regarding fly-tipping on the railway report it to us on 0800 405040.”

Network Rail utilises covert tactics alongside working closely with the British Transport Police (BTP) in order to catch the criminal fly-tippers. Hidden cameras have been installed into areas which are known as ‘grot spots’ in a bid to collect evidence and used to take those responsible to court.

To find out more about how Network Rail deals with fly-tipping, please visit https://www.networkrail.co.uk/communities/living-by-the-railway/litter-and-fly-tipping/.

For anyone with information or anyone witnessing fly-tipping, please contact British Transport Police on 0800 40 50 40.