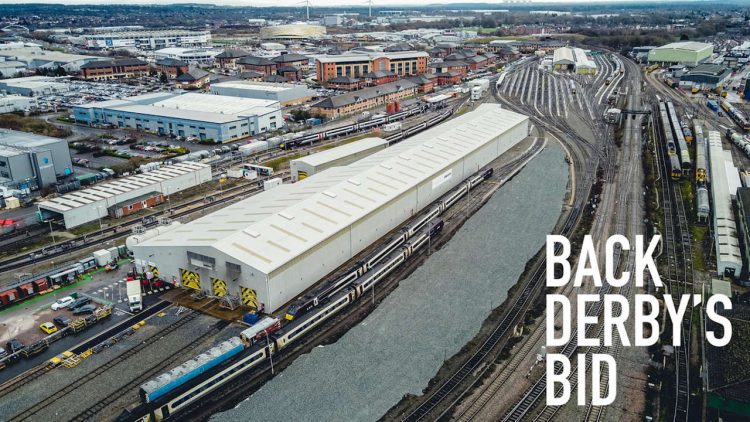 Derby has taken a step closer in its bid to be the new home of Great British Railways (GBR).

Six cities were shortlisted out of 42 towns and cities across the nation that wished to become the location for GBR’s new HQ. As well as Derby, the other shortlisted cities are Birmingham, Crewe, Doncaster, Newcastle and York.

In October last year, the Secretary of State for Transport Grant Shapps announced a competition to find a location for the GBR headquarters outside of London. Historical ties with railways and good train connectivity to other places were among the criteria used to decide the shortlist. As the centre of Europe’s largest rail cluster, Derby considers itself to be a front runner in the competition.

Ministerial visits will now be made to all locations on the shortlist, followed by a non-binding but influential public vote to measure the level of public support for each location. The public vote closes on 15th August and the winner will be announced later this year.

You can vote online here to see your favourite city become home to Great British Railways.

Councillor Chris Poulter, Leader of Derby City Council, said: “We’re absolutely delighted that Derby has been shortlisted to become the new home of Great British railways. This shortlisting is a testament to the hard work of our team, alongside our key rail partners based across the city – we couldn’t have done it without them.

“As well as having a long 180-year plus rail history, what sets us apart is we remain home to a thriving rail ecosystem – Europe’s largest rail cluster.

“I’m thrilled that Derby’s rail credentials are being recognised by the Government.”

Will Rogers, Managing Director, East Midlands Railway, said: “We are proud to support Derby’s bid to become the new home of Great British Railways and welcome their inclusion in the national shortlist. Derby is our home, an historic centre of railway excellence and well located in the heart of the Midlands, providing excellent transport links to towns and cities across the country. We look forward to the public vote, formal visit and the opportunity to showcase why Derby would make an excellent home for Great British Railways.”

Kate Martin is Deputy Principal at Derby College Group (DCG) whose estate includes the iconic Roundhouse in Pride Park – part of the former loco works. She said: “The shortlist announcement is great news for Derby. As the city’s FE college with strong employer and curriculum links to the rail industry, we are fully behind Derby’s bid to bring the headquarters of Great British Railways to the city. This will create high quality jobs for many, including our alumni, and act as a catalyst to further inward investment.”

Richard Kelly, Managing Director at Loram, said: “Loram is delighted to back Derby’s bid for the new headquarters of Great British Railways. Our US parent company made a conscious decision to base Loram UK in Derby, which is at the heart of the railway. With unrivalled access to a dynamic and diverse supply chain, as well as a highly-skilled talent pool, it makes perfect sense to base GBR in this City.”

Justin Stroud, Managing Director, Europe at Sperry Rail said: “Derby is the location of Sperry’s European Headquarters because of its connectivity. After 20+ years of conducting very successful business from Derby, I would personally say GBR would be mad not to use the centre of the United Kingdom as the location to grow the Great British Railway.”

Professor Kathryn Mitchell CBE DL, Vice-Chancellor at the University of Derby, said: “It is fantastic news that Derby has made the shortlist and we are delighted that the University of Derby is a partner in this important bid. Through our Rail Research and Innovation Centre we support collaborative research and innovation projects, helping to modernise the railway through digital and low-carbon solutions. We are also ideally placed to provide the key skills needed to support the anchor employers and supply chain, as well as business support dedicated to the rail and transport sector that will enable growth and create more jobs in the region.”

Michael Hulme, Site Engineering Director at Alstom said: “As the UK’s leading designer, builder and maintainer of trains, we’re proud to call Derby home. The city has been building trains for Britain and the world since 1839 and continues to do so today. We’re delighted to support the city’s bid.”

Councillor Chris Poulter continued: “This is a fantastic boost for Derby, and we urge all residents, businesses and stakeholders from across the whole of the East Midlands to take the time to back the bid and vote for Derby.”

“Derby’s strong rail heritage and deep-rooted culture of future rail innovation make it the ideal central location for the new headquarters. Derby is home to major players in the automotive and aviation industry including Rolls-Royce and Toyota making it uniquely placed for GBR to benefit from cross-sector collaboration and a highly skilled workforce.”