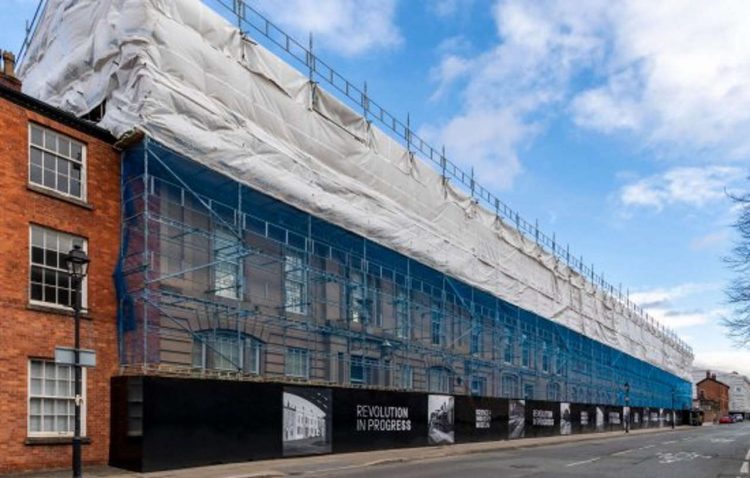 The multi-million-pound restoration programme is underway // Credit: The Science and Industry Museum

The Science and Industry Museum has revealed a film as part of a showcase which shows the extent of its aspirations in taking on the seven-acre restoration project which will be carried out whilst still open to visitors.

The new drone footage and film demonstrates the vast scale and ambition of the restoration project of the globally significant heritage site.

The vast multi-million-pound programme is currently underway and will see vital restoration work completed in order to create new spaces and perspectives for visitors to enjoy.

Exploring how ideas can change the world, the museum features exhibits from the industrial revolution right up to modern-day. The museum is located at the world’s very first intercity railway which is of significant heritage interest and has several grade I and grade II listed structures over the seven-acre city centre site which is located between Castlefield, the Roman heart of Manchester and The Factory which is a landmark new culture space within the city which is set to open in 2023.

The undertaking of the vital restoration work will transform the Victorian buildings and bring improved gallery experience for visitors such as the iconic Power Hall where the term ‘Northern Powerhouse’ comes from, and the 1830 Station and Warehouse which sees some of the world’s earliest railway buildings located in the world’s first industrial city.

The restoration work comes alongside large-scale environmental improvements throughout the site and will open up new spaces for visitors, like the award-winning Special Exhibitions Gallery which originates and hosts the ground-breaking science exhibitions and experiences such as its current exhibit Amazonia.

The Science and Industry museum will also be building new connections to The Factory and the River Irwell and further afield in a bid to enhance the sense of place as the vibrant quarter of Manchester is revitalised over the next few years. External areas will also be planted with colourful schemes and will encourage biodiversity alongside the development of indoor and outdoor family areas.

Director of The Science and Industry Museum, Sally MacDonald, says: ‘This is a very exciting time. We have the honour of occupying some truly exceptional buildings, which are in urgent need of restoration. We are working with specialists and taking great care to transform them, addressing historic issues to conserve important details, but also looking to the future to ensure our buildings are sustainable and provide the best experiences for visitors.

‘We’re carrying out a large programme of decarbonisation across the site, adopting new technologies to ensure that our buildings are standing strong and using less carbon. The technology we use will become part of our ongoing story as we welcome the scientists and innovators of the future through our doors to learn more about how ideas shape our world.

‘What’s more, we are in a district of Manchester where we have some incredible neighbours. It’s our ambition that visitors can walk easily in between all these outstanding attractions, enhancing the sense of place and visitor experience.

‘We’re sorry if the work causes disruption, but we are sure that the final results will be well worth it, as more visitors from our local communities and beyond can enjoy the museum and continue to be inspired by the wonder of science and industry.’

David Bewick of Boca films created the film which features drone footage which provides an aerial view of the massive site and outlines the huge footprint of the museum. The film also shows work being carried out on the Power Hall roof which is the same size as a premier league football pitch.

The 1830 Warehouse has been repointed alongside internal timber joists undergoing repair and restoration. The 1830 Station has also undergone roof repairs making it watertight with future plans set to develop the revolutionary railroad and locomotive experience and tell the railway story. Research is also being carried out on further new galleries such as Manchester as a ‘City of Ideas’ and the wider story ‘Cottonopolis’.

Bev Craig, Leader of Manchester City Council says ‘We welcome the significant investments being made to restore and improve the Science and Industry Museum. What can be achieved here will bring lifelong benefit to everyone who lives in and visits the city. It can transform the site into a place that not just explores ideas that change the world but a museum that can itself change people’s worlds through wonder and play, and inspire curiosity, confidence, and skills.’

The museum is very much open to visitors and has plenty of things to see and do such as the Revolution Manchester, Textiles and Experiment Galleries alongside changing exhibits and experiences like Amazonia, Power UP and a display which celebrates 100 years of the BBC at Manchester. The Science and Industry museum also recently revealed its world premier exhibition and experiences for this year’s Manchester Science Festival which takes place in October and is a partner of the National Trust’s Castlefield Viaduct.

The film can be watched below:

The museum’s decarbonisation has been funded via the Department for Business, Energy and Industrial Strategies as part of Phase I of the Public Sector Decarbonisation Scheme, delivered by Salix Finance.

The museum is on the lookout for additional funding in order to realise all of its ambitions. Passengers can charge their electric vehicles whilst they travel thanks to the new charging points at Edinburgh Waverley...