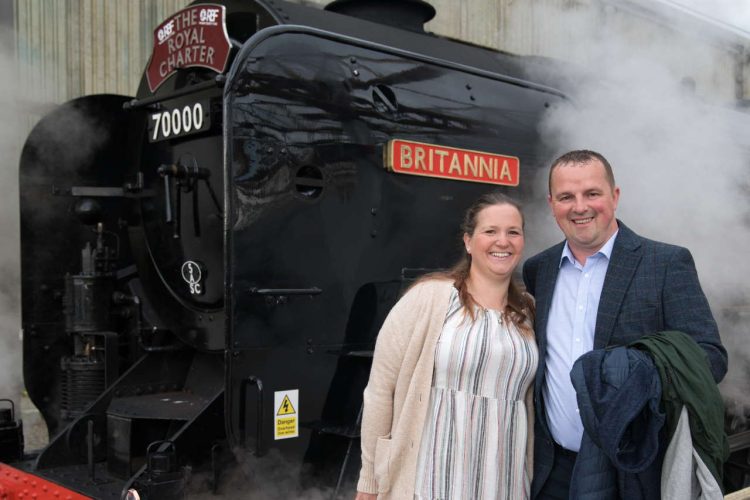 The Railway Benefit Fund (RBF) has operated its most exciting fundraiser to date with a special train to celebrate The Queen’s Platinum Jubilee.

On Friday, 3rd June Saphos Train’s “The Royal Charter” hauled by Standard Pacific No.70000 Britannia, took 250 passengers from Crewe to Windsor. On the train enjoying a luxury day of fine dining were some of the RBF’s Heart of Gold winners, including the Arriva Rail London, Hatch End Station Team and staff from Avanti West Coast and Southeastern.

These awards celebrate the hard work of those in the rail industry. They recognise those who have gone above and beyond their job descriptions to help their communities, passengers, and colleagues. Some special RBF ambassadors were also treated to a day out as a thank you for their hard work volunteering, spreading awareness of the work of the charity, and signposting their colleagues in need.

Two of those on board were Paul and his girlfriend Isla. Her grandfather was involved in the building of Britannia, so what better location for a surprise proposal than on the footplate of this historic locomotive. She said yes!

A permanent reminder of the day can be had by bidding in the charity’s Royal Railway Auction for The Royal Charter headboard that was carried by Britannia on the day. Bidding finishes at 7 pm on Friday, 17th June. You can submit bids ont their website at https://go.eventgroovefundraising.com/royalauction

All proceeds from The Royal Charter will go towards supporting current, former, and retired railway workers and their families who have fallen on hard times.

CEO, Claire Houghton said, ‘We were absolutely delighted to have raised over £60,000 and our thanks go to Locomotive Services Limited and Saphos Trains for making this wonderful event happen, as well as the Branch Line Society for hosting the ticketing.’

Steam locomotive 46100 Royal Scot to pass through Edinburgh, Dunfermline and Stirling this Friday