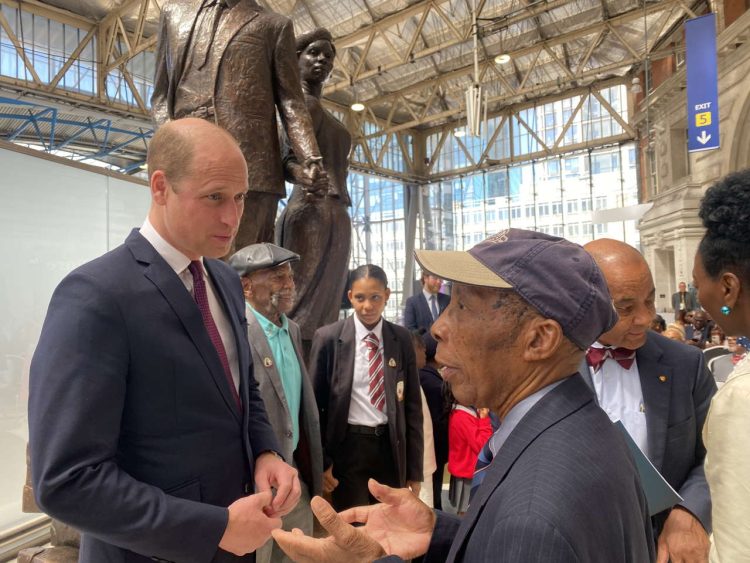 Siggy Craggwell was guest of honour at the unveiling of the commemorative monument which took place at Waterloo station on Wednesday the 22nd of June.

Siggy is a station assistant and at 82 years of age is also Thameslink’s oldest employee!

Siggy was also the guest of honour at the unveiling of the National Windrush Monument and got to meet the Duke of Cambridge Prince William and sat with VIPs such as the Duchess of Cambridge, the chairman of Network Rail and its chief executive, along with the Mayor of London Sadiq Khan.

Chair of the Windrush Commemoration Committee, Baroness Floella Benjamin, remembered how she had arrived in Waterloo, as a little girl from the Caribbean and said:

“The National Windrush Memorial will be part of the British Heritage and be seen by millions of people. It has created a figurative representation of the Windrush generation. It will evoke deep emotion and pride.”

Following the unveiling, Siggy met Prince William, who heard how he had come to the UK from Barbados 60 years ago and had worked on the railways since that time. They also enjoyed a chat about their shared love of cricket.

“It was very, very good, I was quite happy to meet Prince William and speak to him. He was a relaxing kind of guy. I’ve had a wonderful day.”

The monument has been designed by noted Jamaican artist Basil Watson, who created the piece which represents the commitment and resilience of thousands of men, women and children who travelled to the UK to begin new lives from 1948 to 1971.

Watson’s piece acknowledges and celebrates the Windrush generation’s outstanding contribution and has been designed to bring a permanent place of reflection and to bring greater understanding of the generation’s impressive talents, dedicated work and for contributing so much to British society.

The sculpture sees three figures, a man, woman and child dressed in their “Sunday best”, climbing a mountain of suitcases together. The impressive artwork intends to connect with the inseparable bond of the Windrush pioneers and their descendants and their hopes and aspirations as they arrived to start new lives in the UK.

Last used in the 1990s and since their recent discovery, the toilets have undergone a huge refurbishment and...