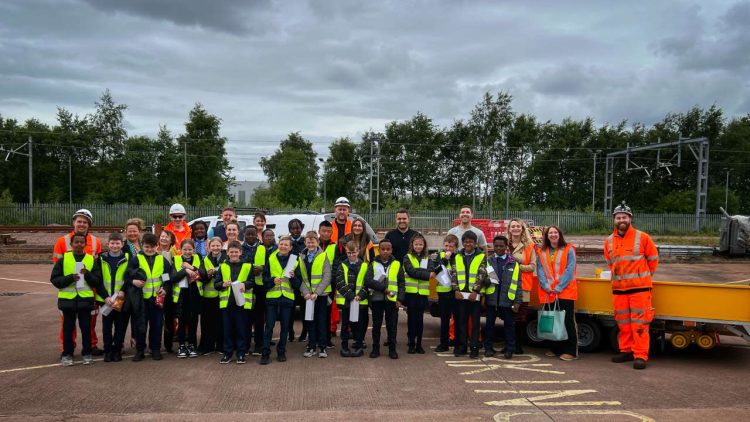 The educational visit was organised as part of a community partnership and saw 45 pupils learn more about the railway industry with workshops held at the MDU in Cowlairs. The pupils got to see first-hand the kind of machinery, tools and technology which are used to keep the railway running.

A demonstration of some of the equipment which maintains 1,752 miles of track across Scotland, was carried out by the Network Rail team and included Road Rail Vehicles (RRVs), industrial chipping machines which manage vegetation and drones which help inspect the track to discover damage or potential risk.

Pupils also got the chance to see the range of skills and different kinds of jobs that are involved in the rail industry alongside extremely important information about staying safe on the railway.

Marie Anne Hendry, Network Rail infrastructure maintenance delivery manager, said: “We were delighted to welcome pupils from St Roch’s to the Glasgow MDU as we recognise the vital role community partnerships play in engaging with communities and in helping young people find out more about the railway industry.

“The positive response during the visit from the pupils is hugely encouraging. For many, it was their first chance to hear about what we do as an industry and I’m confident we’ve planted a few seeds as a future career choice for several of the students, many of whom would never have considered the railway previously.

“It also allowed us to introduce the young people to important information on rail safety and this is something we will look to build on over the coming months, as we undertake further initiatives with the school.”

Ava McGeehan, teacher at St Roch’s Primary and Deaf School, said: “The value of opportunities such as this for St Roch’s cannot be underestimated.

“Through the school’s community partnership with Network Rail, the pupils have been given an avenue to explore which in turn, helps engage and educate them on the possibilities that lie beyond their school years.”

Further to the visit to Cowlairs, the school will be taking part in a STEM event at the school by Network Rail which will see pupils learn even more about engineering and technology and how this is vital in running the railway.