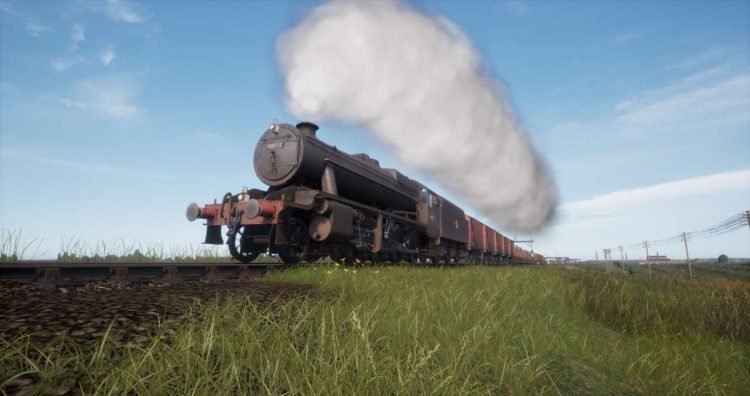 8F with the freight on Train Sim World 2 // Credit: RailAdvent

Steam has finally arrived for Train Sim World 2, with Dovetail Games bringing an engaging route to the game for the first time.

The first route to feature steam for Train Sim World 2 is the 36 mile route from Liverpool Lime Street, authentically replicated for virtual runs with steam power.

Dovetail Games very kindly sent RailAdvent a copy of Spirit of Steam to review – here is what we think!

Included in the £29.99 asking price is the aforementioned 36 mile route from Liverpool to Crewe, an authentic LMS 8F locomotive and an LMS Jubilee locomotive.

Also included in the route is a variety of wagons and Mk1 coaches – everything you need for a full steam ahead trip from the comfort of your own home.

What’s great about this new feature for Train Sim World 2 is the tutorial section. This really goes into detail to teach you exactly how to drive not just the locomotives, but also the route, such as how to read what the signals means, so great for beginners too.

The tutorials are so much better than a paper or PDF manual, especially since the tutorials direct you where to click to do certain tasks (such as turn on the small and large ejectors for example).

15 stations feature in the route, with a variety of junctions, viaducts, yards to keep you entertained on the drive.

Whilst detailed, the route remains playable, with a good 40-60fps throughout our time playing this game in a number of scenarios.

Detail on the route is good for most of the route, unfortunately there are a few sections where line-side vegetation just disappears (bushes, fences etc) – I would love to see a few more line-side assets added to push the authentic feel – thankfully – you are busy most of the time keeping your speed up that you may miss the empty spaces.

All the animations in the game are smooth and high quality, walking through the Mk1s is lovely and you can see the hard work that has gone into modelling them.

Moving onto the audio side of things, custom sounds have been brought to the game for the Jubilee and 8F. You get a decent chuff if the loco is working hard, but i would have liked a few more whistle modes, seems very high pitched and a little boring with just one mode.

We have reviewed a number of TSW routes, with the Isle of Wight and Arosa Line routes only having one train to drive – thankfully Spirit of Steam doesn’t fall into this category. Both the 8F and Jubilee have different characteristics when it comes to driving so will keep you entertained for hours.

So – what is this brand new route, simulation and locos like to drive? Well – simply stunning. The most recent update brings a major downside to a plus. It’s great to get the train up to speed and then sit and watch the loco and wagons roll past with the well known ‘clickety clack’ noise.

The driving is engaging and fun. I’d put it in the sweet spot when it comes to difficulty, not so simply it’s boring, but not too difficult that you spend 30 minutes trying to release the brakes.

It’s nice to see a variety of locos modelled, so you don’t end up driving the same specific loco, each Jubilee also comes with its own nameplate.

What’s great to see is the community really getting behind this DLC – with lots of free re-skins already appearing for the locomotives.

Whilst there are a few points that make you feel like the route isn’t finished, such as the apparent lack of scenery in some places, I hope that the route will be updated in the future and other steam routes will follow if this is a success.

There are other things that we have found, and backs up the “not finished” feel, such as the lack of coal on the fireman’s shovel – however again, this is updatable and is a well-known issue.

Finally – it’s a shame that the yards and scenarios don’t seem busy enough for a steam route, yards can be empty and you don’t see many AI trains at all – but perhaps this is to do with being also available PlayStation and Xbox.

Rounding off this review with three words. Steam. Is. Here.

We have been waiting for steam to come to TSW2 – which brings its own benefits above Train Simulator Classic – we loved playing with this route and cannot wait to see where Steam in TSW goes next.

The route is available through Steam for £29.99 – which considering the backend work gone into just bringing the locos to the game is not too bad at all.

You don’t need any other assets or routes for Spirit of Steam Route to work, just Train Sim World 2 itself – so I’d recommend you get this route and add it to your collection.

Want to see the route in action? Make sure to follow the RailAdvent Twitch channel to see when I go live streaming the route: twitch.tv/railadvent

Thank you to Dovetail Games for allowing us to review this superb route and sending us a copy.

Spirit of Steam: Liverpool to Crewe

Enjoyable route and locos, look forward to seeing how it gets updated