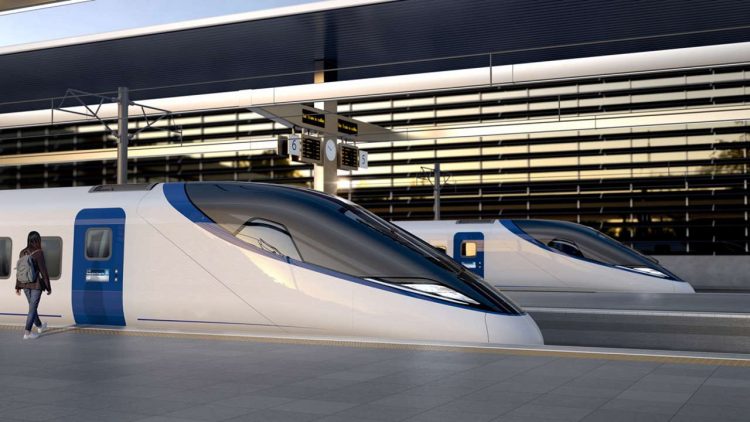 Artists impression of an HS2 train at a platform v1 // Credit: HS2

Passengers using HS2 are set to benefit from technology that provides seamless and uninterrupted passenger communications.

In a step-change from the lineside railway signalling used on the conventional railway network, signalling on HS2 will be radio based. A sequence of masts will be sited at 2-3 km intervals along the route, whilst radio feeder cables will be laid along the length of its tunnels. This infrastructure has been developed so that it also delivers mobile connectivity for passengers.

Signals will be picked up by each train’s radio antenna as it traverses the new route at speeds of up to 225mph. The train’s onboard equipment will transmit the passenger signal throughout the train to help ensure a seamless connection. People using HS2 stations will also benefit from seamless mobile coverage delivering uninterrupted streaming and calls as trains speed through tunnels, cuttings, and open sections.

HS2 engineers believe that trains picking up signals from the railway’s telecommunications infrastructure is superior to relying on passengers’ own mobiles and tablets linking with each passing mast. The new technology will eliminate passengers’ frustration with occasional dropouts and reduced bandwidth. Cries of“I’m going into a tunnel, so I might lose you” are likely to be a thing of the past on HS2.

A further benefit of HS2’s approach will see the benefits of improved passenger connectivity potentially extend to areas along the route since any device that can pick up the signal can use it.

“The massive advantage of taking a clean sheet of paper and developing a new railway network for the 21st century, to operate in the twenty first century, is that we can build in the things people expect, like modern telecoms.

“In practice, that means HS2 tunnels, open route sections, stations, and trains all include telecoms in their design specification, which enables the railway to operate as a single system.”

Richard also explained how HS2’s design has been developed to provide flexibility to support the full generational range of mobile technologies.

“To accommodate fast-moving mobile telecoms technology, we’ve designed HS2 to be flexible so that it can incorporate future generations as well as supporting earlier generations people will continue to use.”