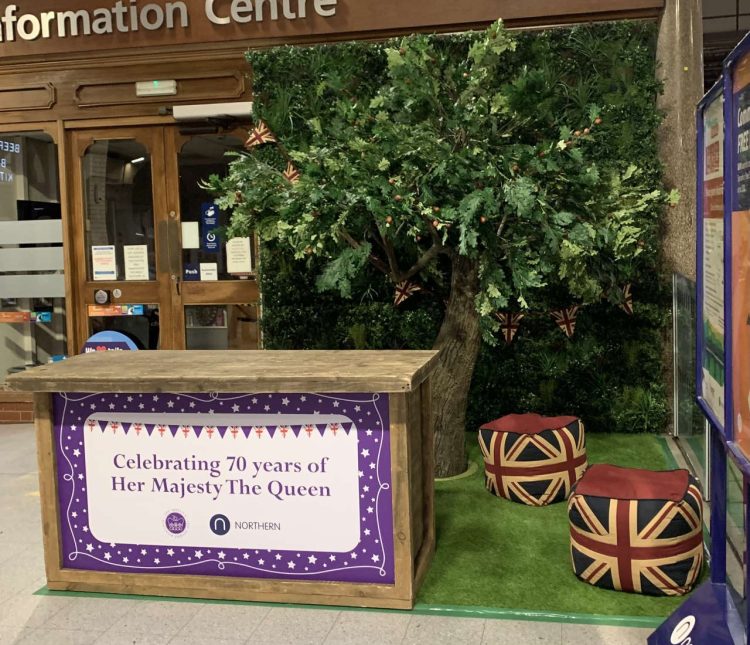 Northern Trains is celebrating Her Majesty The Queen’s Platinum Jubilee by supporting various activities for customers, colleagues, and local communities across its network that accord with the national themes of ‘thanks’ and ‘contribution’.

At Manchester Victoria and Shipley stations between until Sunday, 5th June, ‘Thank you’ trees will be planted and customers, colleagues, and local communities will be encouraged to leave messages of thanks and hope on the branches.

At stations where digital facilities exist, the company Northern will virtually dress the stations with official jubilee branding. Trains will also carry the royal emblem throughout the jubilee week and over the long bank holiday weekend.

Limited-edition brochures that highlight Northern’s and the rail industry’s contribution to local communities over the last 70 years have been specially commissioned. They will be on sale for £5.00 at some of its stations, including Barrow-in-Furness, Harrogate, Hartlepool, Leeds, Liverpool, Meadowhall, Manchester Victoria, and Windermere.

It is hoped that more than £175,000.00 can be raised across the country for The Railway Children, Save the Children, Railway Mission, The Railway Benefit Fund, and Women in Rail.

In Bradford, Leeds, Manchester and Newcastle, Northern will be working with a number of schools to reward pupils who have shown kindness and community spirit.

At Heaton, Holbeck and Newton Heath train maintenance depots, and at Leeds station, depot tours, station visits, and STEM education sessions will be available, and pupils will also be treated to a Royal Jubilee picnic on board specially decorated trains.

Events, garden displays, and station decorating have been taking place across the network thanks to station adopters and Community Rail Partnerships.

Northern colleagues have also been reminiscing and contributing their royal memories to internal magazines. They have also recorded a special video message to Her Majesty which will be released via Northern’s social media channels.

“It is going to be a fantastic week of national celebration in recognition of Her Majesty the Queen.

“We wanted to be part of those celebrations and have focused our efforts on acknowledging our communities, colleagues and customers for their contribution and that of the railway in the north over the last 70 years.

“We are hoping to raise money for some very worthy charities, reward kindness and community spirit, support our local partners and give everyone the opportunity to say thank you.

“On behalf of everyone at Northern I want to thank Her Majesty for her continued service to our country.”