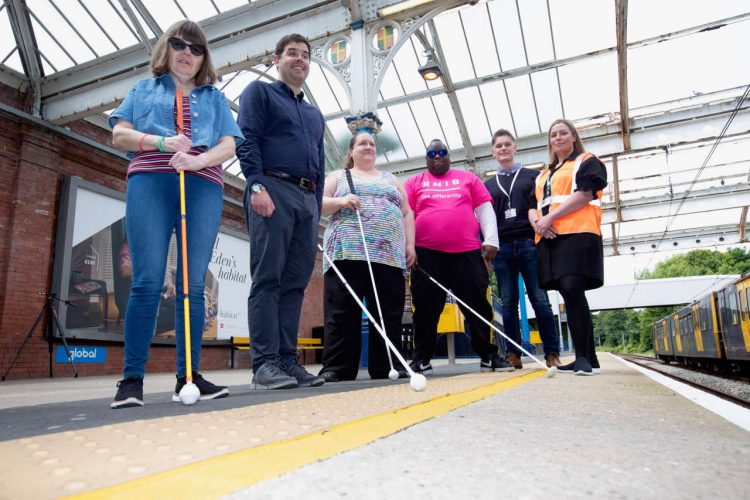 tactile paving on the platform to help the blind // Credit: Nexus

The Tyne and Wear Metro has become the first railway in England to install tactile paving on all platform edges in a bid to support blind and partially sighted people.

Nexus, who own and operate Metro have now carried out the accessibility upgrades to the 12 remaining stations which were awaiting the installation of tactile strips.

The project’s completion now means that all 60 metro stations feature tactile surfacing which provides both a visual and physical alert to the edge of the platform and will support people with visual impairment and comes alongside the delivery of step-free access from street to platform.

Major Projects Director at Nexus, Cathy Massarella, said: “I am delighted to say that Metro is the first railway in the country to have tactile paving on every platform edge. This provides a major accessibility improvement for customers who are blind or partially sighted.

“We worked closely with RNIB, Guide Dogs, and other local disability campaigners to bring this project to fruition. Forty-eight stations on our network already had tactile strips and this project was all about bringing this in at a further 12 stations so that all 60 stations have this feature.

“It is a huge stride forward in making our network safe and secure for people who are visually impaired. It means that Metro corresponds with the national accessibility guidance set by the Department for Transport.

“Metro has a very high accessibility standard. We have already invested in tactile paving, dual height handrails and anti-slip surfacing to improve accessibility for customers with disabilities. All of our stations have step-free access from the street to the train door.

“When our new trains arrive they will have automatic sliding steps, allowing for seamless boarding, eliminating the gap between the train and the edge of the platform. The new Metro fleet will be transformational in terms of improved accessibility.”

Lewis Winton, RNIB Regional Campaign Officer for the North East, said: “Tactile paving is not just an accessibility measure, it is fundamental to the health and safety of passengers and pedestrians. There should be no train platforms without tactile paving. The feature is essential in enabling blind and partially sighted people to travel independently and safely.

“We are delighted that the Tyne and Wear Metro has become the first rail network in England to have tactile paving installed on all its platforms and we would urge all rail networks to follow suit.”

Whitley Bay and Tynemouth were the last two stations to see the tactile edges put in place, this was due to the need to obtain listed building consent. Whitley Bay will also see its historic glass canopy roof restores this summer with a further investment of £2m by Nexus.

The project was undertaken ‘in-house’ by the Nexus Capital Delivery department with the next stage of the upgrade project seeing the installation of tactile paving on all staircases throughout the Metro network.