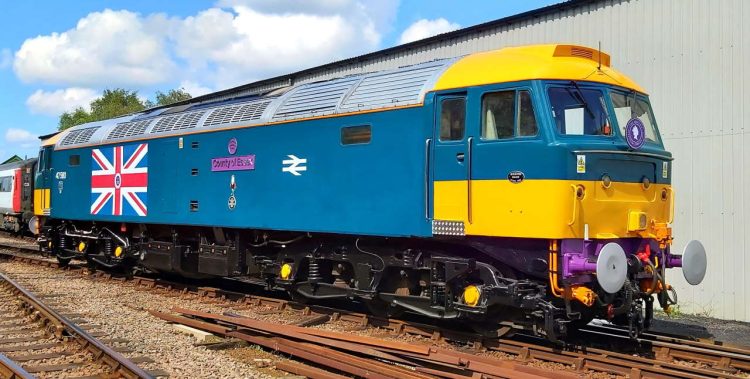 The Mid Norfolk Railway’s resident Class 47 No. 47580 County of Essex has been repainted in a new livery to commemorate Her Majesty’s Platinum Jubilee.

Originally painted in Monastral blue with a grey roof and large Union Jack on each side, County of Essex has a new livery to commemorate the Platinum Jubilee. The name plates and buffer beams have been painted purple and the cabs have a new blue and yellow colour scheme.

Trains were scheduled to be hauled between Dereham and Thuxton by County of Essex yesterday, Thursday, 2nd, and today, Friday, 3rd June with the first train departing from Dereham at 1000 and the last at 1600.

The last train of the day will be doubled-headed with classmate D1933 Aldeburgh Festival hauling the train to Thuxton and then top and tailing for the return journey.

Tickets are available on the day from Dereham station, and standard fare applies but the popular Kids go Free promotion is available.

At Dereham station, there is free car parking, and a shop and buffet will be open. Full details of tickets and timetables are available at the railway’s website at www.midnorfolkrailway.co.uk

The Mid Norfolk Railway is the longest standard-gauge heritage railway in East Anglia and runs through the Heart of Norfolk. The railway has its headquarters in Dereham and runs south to Wymondham Abbey Halt station. The line is also being restored north towards North Elmham and will run to the railway’s County School Station.

47580 was built by Brush at Loughborough in 1964. As D1762, it was originally allocated to Tinsley before moving to Stratford TMD. On 2nd August 1979 it was named County of Essex, but the nameplates were removed in 1993.