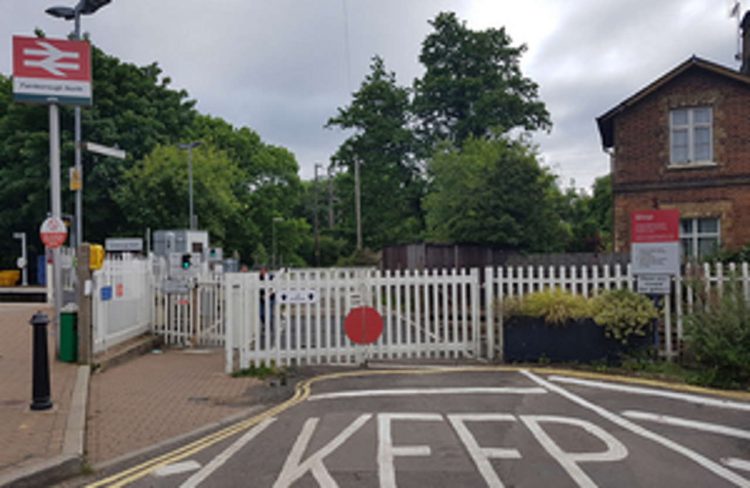 The Rail Accident Investigation Branch (RAIB) has released its preliminary investigation into a near-miss at a footpath level crossing at Farnborough North station.

At around 08:22 on 19th May 2022, the 07:02 Great Western Railway service from Gatwick Airport to Reading was approaching Farnborough North station at around 70 mph. As the train approached, the driver observed a large group of people using the footpath crossing at the station. The driver sounded the train’s horn and made an emergency brake application, but the users did not clear the crossing until about five seconds before the train passed over it. No-one was hurt in the incident.

The crossing is fitted with gates and miniature stop lights, which show a red aspect to pedestrians when trains are approaching. Pedestrians should not use the crossing the red aspect is showing. The gates at the crossing are also fitted with magnetic locks, which are operated by a level crossing attendant between 05:30 and 00:30 hrs. These locks are intended to prevent an already closed gate from being opened by users, and are activated when a red aspect is displayed on the miniature stop lights.

The train involved in the incident would normally have stopped at Farnborough North station. Due to earlier disruption, the service had been changed to a service that was not scheduled to stop at the station. The arrival of the train was not indicated on passenger information screens installed on the platforms.

The RAIB’s investigation will seek to identify the sequence of events which led to the incident, and will also consider:

The RAIB’s investigation is independent of any investigation by the railway industry or by the industry’s regulator, the Office of Rail and Road. At the conclusion of the investigation the findings will be published, including any recommendations to improve safety.