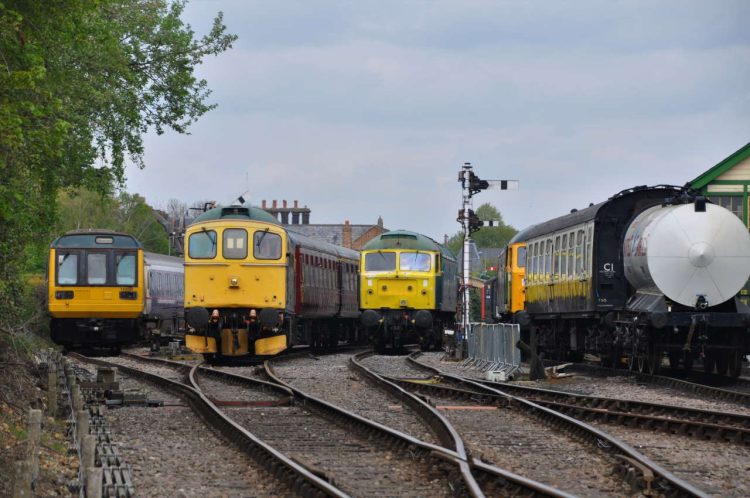 In addition to the new service, all trains no matter which timetable, are running south for the five miles to Thuxton Station instead of to Wymondham Abbey Station at the moment as engineering works on the line are being carried out.

The 2022 relaunch also welcomes a new Orange Diesel Hauled timetable and will make use of the railway’s Heritage Diesels including the resident class 14, class 33 and occasionally one of the class 47s.

The heritage railway has now found a coal supplier which will allow the Blue Steam service timetable to operate with trains hauled by resident British Railways Standard Class 4 MT engine 80078 or Austerity number 22 which is on season-long hire .

Explaining the relaunch, Charlie Robinson, the Chairman of the Mid Norfolk Railway, said “After the disappointment and uncertainty of our postponed reopening caused by the long-standing engineering issues that the railway faces and the impact of the lost income from the cancelled Polar Express service at Christmas, the railway has decided to relaunch our running season as a consolidation exercise.

“The Mid Norfolk Railway expects to restart services to Wymondham Abbey in time for the school holidays in July. Despite this delay, however, we have still been able to start a new regular service running north from Dereham which therefore marks an important point in the railway’s history and is another small step towards the eventual return to County School”.

The line south of Thuxton will reopen for passenger service on the completion of the relaying of a section of track between Thuxton and Hardingham, which will see the lifting and replacement of worn-out wooden sleepers.

A section of track near Bridge 1675 will be getting the track realigned which will remove the excessive curves that were introduced by British Railways when the line was made single and one of the two bridge spans removed. The railway has been aware of the issues for a long time but had to wait due to other higher priorities being dealt with over recent years.

The 2022 running season will see the railway once again run its popular ‘Breckland Fryer’ fish and chip trains in the evening alongside afternoon cream tea trains on specific running days. The railway will also keep running its ‘Kids Go Free’ family tickets which were successful when introduced in 2021. ‘Kids Go Free’ family tickets are available for all standard running days but don’t include special events or special trains.

The MNR shop at Dereham Station has also undergone a refresh and features new lines of merchandise and clothing which feature the railway’s new ‘Heart of Norfolk’ Logo.

Events and timetable details will be available on the railway’s website soon. Trains are once again running at the Mid Norfolk Railway’s (MNR) County School station in Norfolk, albeit only...