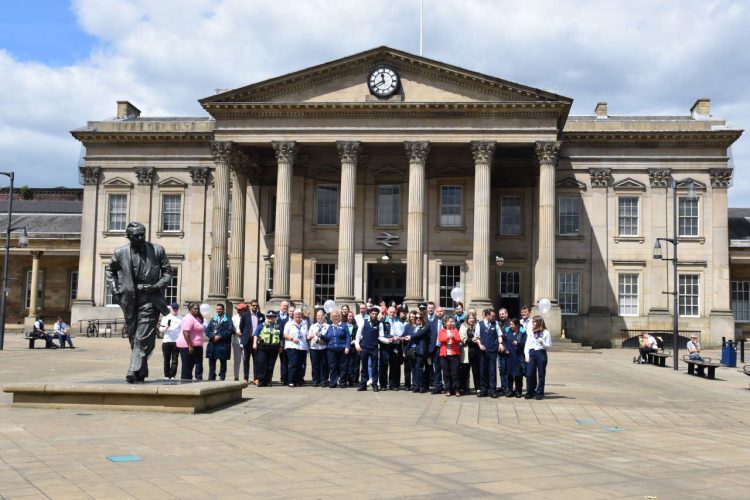 TransPennine Express (TPE) unveiled the plaque in honour of a former colleague who died while on holiday earlier this year. Qazi Mahmood, 46, passed away in May while visiting his family in Pakistan, and is now remembered with a permanent memorial at Huddersfield station.

The memorial plaque is displayed within the main concourse of the station. It describes Qazi as “A dearly missed friend and part of our railway family. Remembered by all at TransPennine Express”’.

Qazi was a former Revenue Protection Assistant and was incredibly popular among colleagues and customers alike, and will be sadly missed by the wider rail community.

The unveiling ceremony saw colleagues gather outside the front entrance of the station. Balloons were released to celebrate Qazi’s life, and his colleagues wore special memorial ribbons bearing Qazi’s name.

Angie Hunte, Interim Station Manager at Huddersfield, said: “We have lost someone larger than life, impossible to ignore and impossible not to love.

“This station won’t be the same without him and the world will be a little less bright. But we will remember the happiness and love he brought into our lives.”

Scott Goddard, Duty Manager at TransPennine Express, added: “Qazi brought so much light and happiness into our personal and working lives. He will be remembered as a person of great warmth and kindness. A friend who was proud to work on the railway, and proud to work at Huddersfield Station. It is a testament to Qazi’s character and legacy that his passing was felt all over the railway network.”

Jamal Zafar, Gateline Assistant for TransPennine Express, said: “When I met Qazi he was a stranger to me. Over time I knew him as a colleague, then a friend, and then as a brother.” A new art display has gone up at Huddersfield Railway Station this week. Local children and people from...