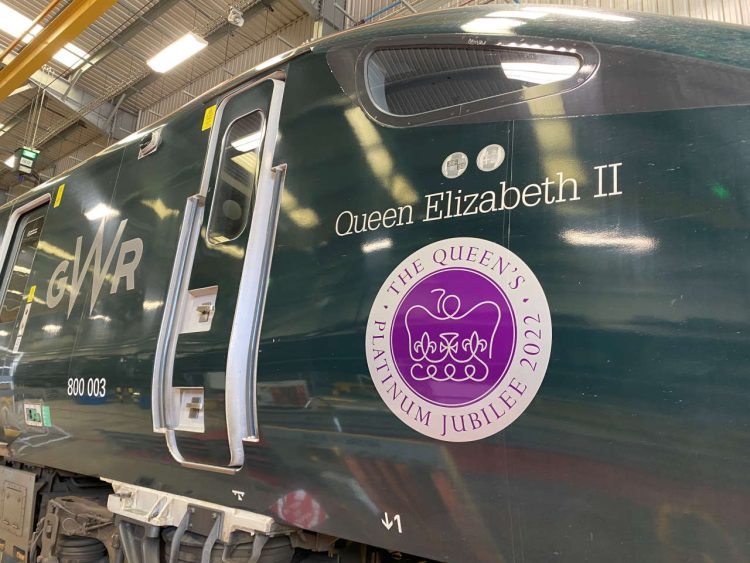 I have added the vinyl emblem depicting the official Platinum Jubilee logo below Her Majesty’s name on the side of the driver’s cab of Intercity Express Train 800003.

On 13th June 2017, Her Majesty named 800003 to mark 175 years since Queen Victoria made the first rail journey by a monarch in 1842. The design includes a striking silver and purple crown emblem, marking yet another historic Royal milestone.

800003 was the first of the new GWR Hitachi IETs to be named, with over 50 having been named since, the latest being Alan Turing OBE who became the most recent of GWR’s celebrated heroes last week.

His name, and the updated Trainbow flag design, was added to 800008 to mark the delayed VE75 commemorations as well as Pride Month in June.

On Jubilee Day, 2nd June, 800003 is scheduled to haul the following services:

“We were delighted to name 800003 after Her Majesty back in June 2017 and we know it is one of our most popular Intercity Express Trains on the network.

“Adding the special Platinum Jubilee emblem is a fitting tribute and the perfect way for Great Western Railway to celebrate Her Majesty’s 70 years on the throne.” The train-naming event recognises BBC Make a Difference Superstars who went above and beyond support others during the...