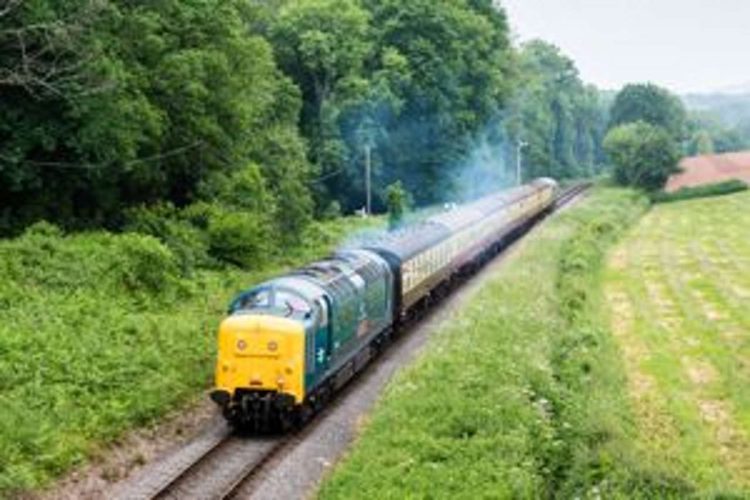 Over the last weekend in July, the Gloucestershire Warwickshire Steam Railway is holding this year’s Heritage Diesel Gala.

After a two-year Covid-enforced absence, the event from Friday, 29th to Sunday, 31st July is one of the railway’s showpiece events with a summer festival of heritage diesel traction.

The three-day event at the Gloucestershire Warwickshire Steam Railway will transport visitors back to a time when British Rail ran locomotive-hauled trains the length and breadth of the country, from large powerful express locomotives on inter-city journeys, to smaller mixed traffic and freight types, many of which were pressed into use during the summer months taking people from towns to seaside resorts.

Star of the show will be an iconic Class 55 Deltic No.55019 Royal Highland Fusilier. This will be the first time that a Deltic operated over the former Stratford-upon-Avon to Cheltenham main line. Other locomotives appearing will come from the railway’s home fleet, which includes:

At Toddington, the diesel maintenance shed will be open to visitors. Among the locomotives on view will be immaculately restored Class 37 locomotive No. D6948 and 1959-built Class 26 No.D534,3 both of which are undergoing overhaul.

Most of the railway’s fleet of heritage diesel locomotives are now well over 50 years old, and the gala will pay tribute to the history of British electrical and mechanical engineering from the 1950s and 1960s. A time when Britain was still at the forefront of locomotive technology and exported railway locomotives all over the world.

The best way to buy tickets for the event is in advance from the railway’s website at https://gwsr.vticket.co.uk/section.php/58/1/summer-diesel-gala-2022

Discounts are available for tickets purchased online, with one-day adult tickets for £27. Multi-day rover tickets offering substantial savings are also available, but must be booked in advance. Tickets can also be purchased on the day, with adult tickets at £30.

The railway’s website at https://www.gwsr.com/Diesel_Gala.html provides details of the locomotive line-up, timetable, fares, on-line booking, where to stay, and attractions at the railway’s stations.

Unfortunately, the railway no longer issues lineside passes. However, photographers can take advantage of many vantage points that have public access from footpaths, roads, stations, and other locations without the need to access the railway’s property. Ordnance Survey maps Explorer OL45 and Landranger 162 and 163 depict the footpaths and vantage points along the railway. The GWSR is holding its Heritage Diesel Gala from 29th to 31st July when it will celebrate vintage...