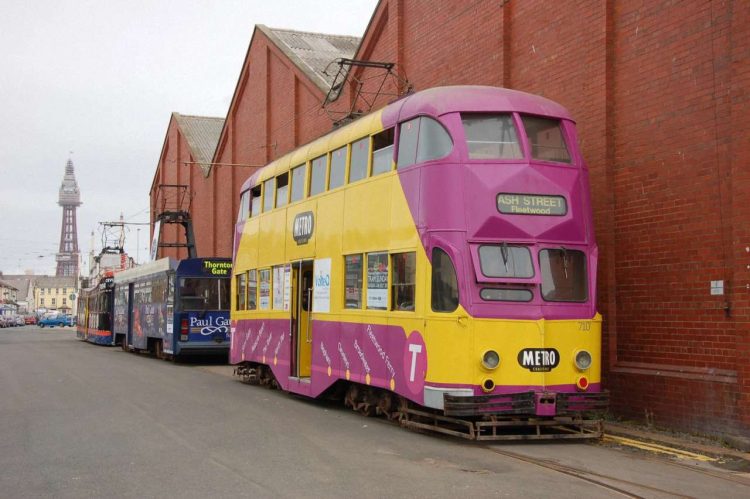 The Fleetwood Heritage Leisure Trust (FHLT) is disposing of its trams but is experiencing problems finding a home for Balloon Car 710 which has been stored at Wyre Dock for several years.

The Trust has a deadline in 2022 to remove its trams from Wyre Dock. Without a firm commitment to remove the tram from Fleetwood, the Trust will need to arrange for it to be dismantled for scrap or spare parts.

There are various examples of this tram at Rigby Road Depot in Blackpool, so there is no need to add a further example to the existing lines of trams stored there. However, there may well be options for it to be moved elsewhere in the country which may not necessarily be of a transport heritage profile.

Car 710 is a vintage tramcar built in 1934. It was originally open-topped as part of Walter Luff’s grand Five Year Plan to upgrade all of Blackpool’s municipal transport system, both tram, bus, and infrastructure. The tram was built on Strand Road, Preston by the English Electric Company.

It is famous for its starring role in the Coronation Street episode watched by over 11 million viewers in which villain Alan Bradley met his demise.

Number 247, or 710 in its later format, retains its swing back seating on both decks with seats stored seperately. It also retains its half-drop side windows and has the original alhambrinal-type ceiling panels, although they are painted over. On the top deck the curved corner glazing remains unaltered from its wartime enclosed addition.

Passenger interior handles and exterior door fittings are all of the original chromed style as originally built. In its final years of service it was repainted in a version of Metro Coastlines livery, which has been retained but has weathered badly due to being stored outdoors.

Before being handed over to the FHLT the tram was put on display in windswept rain on the back of a low loader at the Tram Sunday event. The tramway was being upgraded in 2011, with bus replacement services to Fleetwood.

The FHLT’s aim was for 710 to form part of an ambitious heritage transport visitor attraction at Wyre Dock. Unfortunately, that aim is not now possible and number 710 (or 247 as it was originally numbered) is now available. Anyone interested in acquiring the tram should contact the FHLT at https://www.tramtalk.co.uk/contact