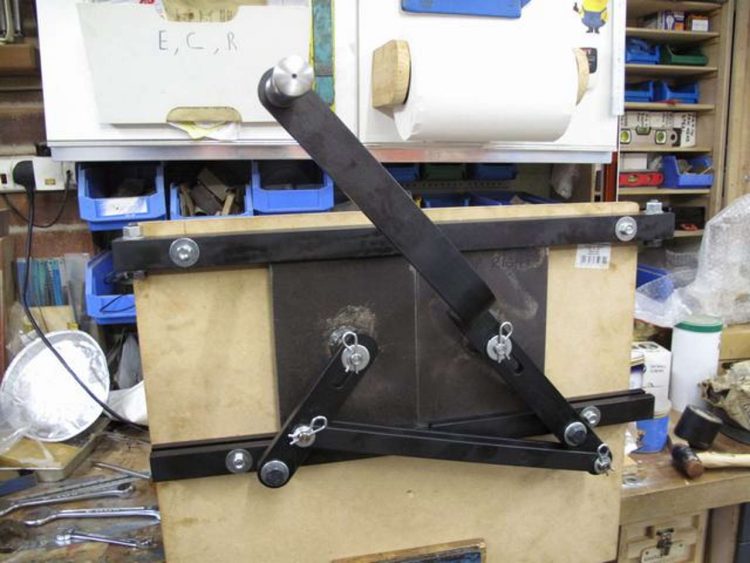 Work during April at Alan Keef Ltd has so far seen sections of the footplate made and fitted to the locomotive which will allow for the future mounting of the smokebox. Further work has also seen the handbrake screw machined and connected to the rest of the mechanism and now completes that part of the brake assembly.

The type of air brake cylinder to be used has now been chosen in order to allow suitable mounting to be made and although this was not a planned priority at this point of the build but became necessary to deem whether the multiple interconnecting parts could establish clearance of other components.

Accurate measuring of components and clearance is vital due to the locomotives inside motion and overall small size. The deliberation meant that a volunteer has built a wooden ashpan to allow a trial fitting ahead of the same volunteer creating a steel version that will be fitted to the engine. Another volunteer has made the firebox doors and opening mechanism.

The brand new steam locomotive will be Corris Railway’s second to go into service on their restored section of the oldest narrow gauge railway in Mid Wales and is located in the scenic Dulas Valley between Machynlleth and Dolgellau.

The Falcon marks a modern-day evocation of three engines built at the Falcon Works in Loughborough in 1878 one of which is now Sir Haydn on the Talyllyn Railway. The new-build locomotive will see differences from the originals such as a visibly higher cab which will allow for taller drivers and firemen than their Victorian counterparts, however, Falcon’s new cab does follow a similar outline to that of the original three during their time at the Corris.

It is hoped that the first steaming of the new locomotive subject to ongoing successful fundraising is the 24th of September 2022 where it is outlined to be the focal point for a charity open day at the Alan Keef Ltd workshops. Following this, work will be ongoing and will see painting with a target date set for its entry into service on the Corris in early 2023 which is also subject to fundraising.

Donations toward the new build engine are welcome and will mean that the timescales can be met.

Donations can be made online at www.corris.co.uk or by cheques and standing order, full details are on the Corris website. Over 300 rail industry volunteers will be aiding those travelling to the Birmingham 2022 Commonwealth Games venues by...