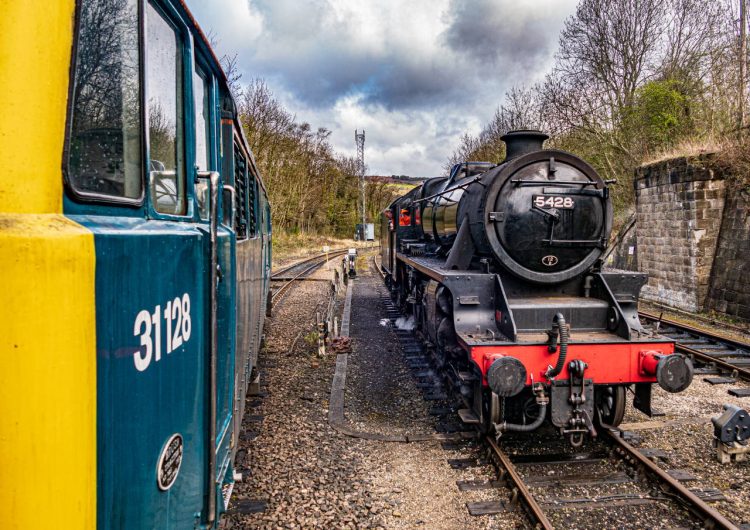 After months of preparation, the 2022 North Yorkshire Moors Railway Season is in full swing, and they invited RailAdvent onboard for a trip to Whitby.

The season runs until the 30th October, and the railway has three options for travel. These are: The Seaside Special (Pickering to Whitby and return), Moors Explorer (Grosmont to Pickering and back. Hop on, Hop Off service) and the Yorkshire Express which runs from Whitby to Pickering and return.

The North Yorkshire Moors Railway gave us two tickets for The Seaside Special, which in peak times gives you the option of a 09:20 or a 12:00 departure from Pickering.

Pickering, the eastern end terminus of the North Yorkshire Moors Railway, has been restored by volunteers and now boasts a shop, cafe and a Peter’s Railway Young Engineers Centre.

Our locomotive for the day was LMS Black 5 No. 5428 Eric Treacy. This arrived shortly after the carriages arrived from the carriage shed. After a top up of water, a toot of the guard’s whistle and we were off for a trip through stunning scenery.

This is the second time we have been invited by the NYMR for a trip to Whitby. Unlike last year, masks are no longer compulsory but it is nice to see the sanitation stations are still dotted around all of the stations.

On the Whitby trains, you cannot get off at any of the intermediate stations (Levisham, Newtondale Halt or Goathland) but it is great to see children’s faces when they are told Goathland is where Harry Potter was filmed.

After Goathland, we rolled into Goathland, passed the engine sheds (with 65894 on test). Here, we changed locomotives from steam to diesel in the form of 31128, which was visiting the line.

31128 took us comfortably to Whitby, where we were slowly ushered off the station.

Whitby is served by Northern services to Middlesbrough, and we saw a 156 operating one of those services. This was then followed by 31128, which departed with a service to Pickering.

Unfortunately, the weather then took a turn for the worse.

The rain rolled in and the skyline disappeared, so make sure you are prepared, just in case it rains on your trip to Whitby.

Perhaps the option to return on an earlier train if space is available might be a useful enhancement.

There are plenty of shops to see in the centre of Whitby, along with the chance to explore the harbour and surrounding area.

After a wander around, it was time to head back to the station, 76079 rolled into Whitby to take us all the way to Pickering.

Unfortunately, neither of the trains we travelled on either had steam heating (it either wasnt working or plugged in) – so I’m glad we brought a coat. However, the Hot Chocolates served from the On Train Buffet were welcome and the staff were very friendly.

For us, the best of pick for tickets is the Moors Explorer service, this allows you to explore Grosmont and Goathland in your own time. Goathland for one is well known for its role in Harry Potter and the Heartbeat series.

In addition to the summer services, the NYMR has confirmed events for 2022 and includes

You can book tickets via the NYMR website, with prices starting from £20.50 for children and £41 for adults. For every penny you spend at the railway, it all goes back into the funding for the railway and its operations.

We would like to thank the North Yorkshire Moors Railway for inviting us for a trip along their stunning line – if you are in the area, please do go check them out and have a day out with them.