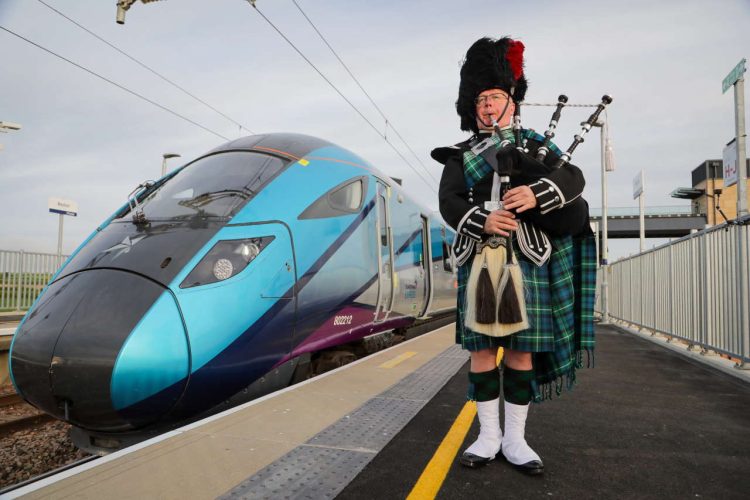 Reston station in East Berwickshire in the Scottish Borders has re-opened for passengers for the first time in over 50 years.

The station became operational again when the 6.16 am TransPennine Express (TPE) service from Edinburgh became the first passenger train to stop there since 1964.

To mark the historic occasion, the first train to call at the new £20 million station, a TPE Nova 1 No. 802212, was named St Abb’s Head after the picturesque Scottish National Trust reserve located just a few miles away.

TPE marked the occasion by handing out thousands of goody bags, and providing free tea, coffee, and water onboard their services. Schoolchildren from Reston Primary School welcomed Transport Minister, Jenny Gilruth MSP, who travelled on one of the first TPE services to stop at the station, and were treated by TPE to a complimentary day trip to Edinburgh.

To celebrate the opening of the station and the new connection for local communities in Scotland and Northumberland, TPE has introduced special introductory fares from as little as £2.70 for travel between May 23rd and August 22nd this year. Customers looking to take advantage of the introductory offer can click here to find out more.

You can see the first train arriving into the station below:

Matthew Golton, Managing Director of TransPennine Express, who was among TPE customers on the first rail journey to Reston, said: “This is a landmark day for Reston – and for TPE – and we’re delighted we’ve been able to work with our partners to help connect communities in the Scottish Borders.

“Our customers are at the heart of everything we do, and it was fantastic to see so many using our newly named ‘St Abb’s Head’ Nova train this morning. We’re excited to welcome the hundreds of future travellers who have already purchased advanced tickets and look forward to the part TPE will play in providing new leisure and commuting opportunities for the local community.”

Transport Minister, Jenny Gilruth MSP, said: “Thanks to the Scottish Government’s investment of £20 million, rail services are returning to Reston station. I am delighted to be celebrating the re-opening of Reston, connecting another part of the Scottish Borders to Scotland’s rail network.

“For the first time since 1964 the people of Reston and Berwickshire will have rail connectivity.

“We know that reconnecting communities to rail isn’t just about transport; it’s opening up employment opportunities, it’s driving investment & it’s creating opportunity for future generations. This investment will change the lives of the people of Reston for the better.”

Ciaran Hatsell, the National Trust for Scotland’s Ranger for the Borders and St Abb’s Head National Nature Reserve, said “This is a fantastic initiative by TransPennine Express and we’re greatly honoured by their decision to name one of their trains after St Abb’s Head.

“One of the core purposes of the Trust is to ensure people have access to heritage, and we are very supportive of the use of public transport to facilitate this. This initiative combines respect for a magnificent coastal setting with respect for the environment by promoting and improving rail use. We hope as many people as possible will take the opportunity to use the service.”