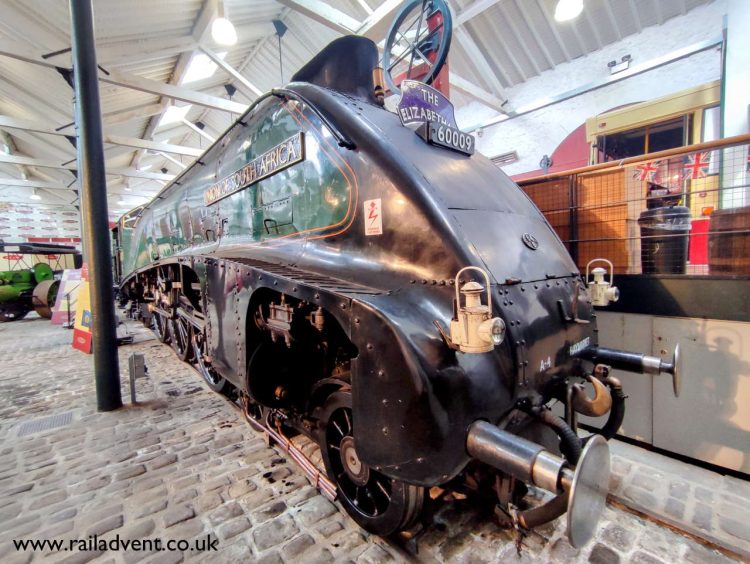 Today, RailAdvent was invited to the Bury Transport Musuem to see Ex-LNER A4 No. 60009 Union of South Africa unveiled at its new home.

Since its withdrawal from the mainline and later withdrawal from heritage railway service, the A4s future has been uncertain, but a new deal between the BTM / ELR and the owner of the locomotive, John Cameron, will see the A4 parked in the Bury Transport Museum for 2022 with its new exhibition.

You may think it’s odd that an East Coast thoroughbred is on the West side of the country? Well did you know that Sir Nigel Gresley, designer of 60009 Union of South Africa, actually began his railway career with the Lancashire & Yorkshire Railway and worked at both Blackpool and Horwich sheds?

Open from tomorrow (1st June), visitors to the museum will be able to get up close and personal with the A4 class locomotive, inspecting its huge driving wheels or getting a photo in front of the locomotive.

What’s more, visitors can visit the footplate of the locomotive and sit in the driver’s seat,

RailAdvent can also reveal that whilst the loan of the locomotive is for 2022, discussions are already underway to extend this loan beyond 2022.

What’s your favourite memories of 60009? Let us know in the comments below or share them on LocoStop!

You can view best selling 60009 Union of South Africa products below: