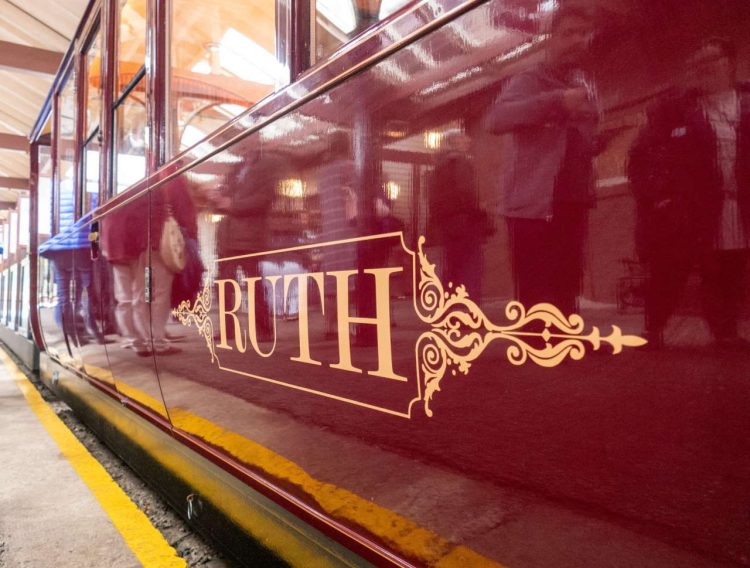 Last week, the Ravenglass and Eskdale Railway invited RailAdvent to Cumbria to see their three new carriages launched and named.

Upon arrival at Ravenglass, we were greeted by the Ravenglass team with our locomotive for our VIP train, Whillan Beck.

All three new carriages have been built by the Ffestiniog and Welsh Highland Railways at their Boston Lodge Works in Minffordd, North Wales.

The day started with speeches from Peter Hensman, company director and fellow Director James Clarkson Webb. Speeches included thanks to the designers of the carriages as well as the team at the Ffestiniog.

The carriages have been built as a legacy to Lord Wakefield, who founded the Lake District Estates Company and saved the line from closure in 1960.

The three carriages that were being launched and named were new Directors Saloon ‘Ruth’, Pullman Observation coach ‘Joan’ and 1st Class saloon No. 140.

The Ffestiniog & Welsh Highland Railway was commissioned in 2018 after the Ravenglass and Eskdale Railway secured match-funding from the European Regional Development Fund.

The final carriage to be built and arrive at in Cumbria was Ruth, which arrived in Autumn 2021.

With the ribbons cut, we boarded our outbound seats in 140 for a trip to Dalegarth. This 1st Class saloon has large windows and plenty of room.

We slipped out of Ravenglass and enjoyed our picnic boxes on our way through the valley.

On arrival into Dalegarth, the rain had stopped and we were given another chance to have a look round the carriages.

The newest arrival, Ruth, is incredible with a high spec finish, it is intended for groups and parties wanting that extra special visit to use this carriage for special occasions with cream teas or Lakeland hampers.

The carriage also features an outdoor balcony with seating, USB speakers, folding tables, and is split in two with engraved windows, allowing both sides to become one.

The folding tables in Ruth allows for wheelchair access too.

Our trip back to Dalegarth was in the observation end of Joan. Now if you have ever been to the Ffestiniog and Welsh Highland Railways, then this observation coach is just like Carriages 150 and 152, but in miniature!

This coach provides panoramic views of the estuary and mountains going one way, and the other you get to see and hear the loco working hard.

All three carriages are available to book exclusively for a party, or passengers can upgrade their ticket to ride in Joan or the 1st Class saloon on the day.

The cost of upgrading a ticket is £5 per person each way, which considering the upgrade in spec is good value for money.

Mr Peter Hensman, Chairman Lake District Estates says, “These new carriages take La’al Ratty to a new level of comfort and will enable our visitors to fully appreciate the beauty and grandeur of Eskdale. At the same time, by naming two of them Joan and Ruth, we pay tribute to the daughters of Lord Wakefield who, as directors of the Railway over 40 years, played a significant part in its development and success.”

Georgina Townsend, daughter of Mrs Adorian, says “my mother was the youngest daughter of Lord Wakefield of Kendal and a Director of Lake District Estates for over 50 years. She was devoted to serving all the many facets of the company and would have been absolutely delighted with ‘Ruth’ and very proud of the high standards of craftsmanship it represents.”

Mrs Adorian’s son, James Clarkson Webb comments, “fighting Motor Neurone Disease for the last 12 years of her life she was particularly keen on incorporating accessibility wherever possible and this carriage with its fold-down tables providing flexible space for wheelchairs is a fitting tribute to the ongoing legacy which she leaves behind.” Steam locomotive 34046 Braunton will haul 'The Lakelander' between Preston and Carlisle this Saturday 9th April 2022.