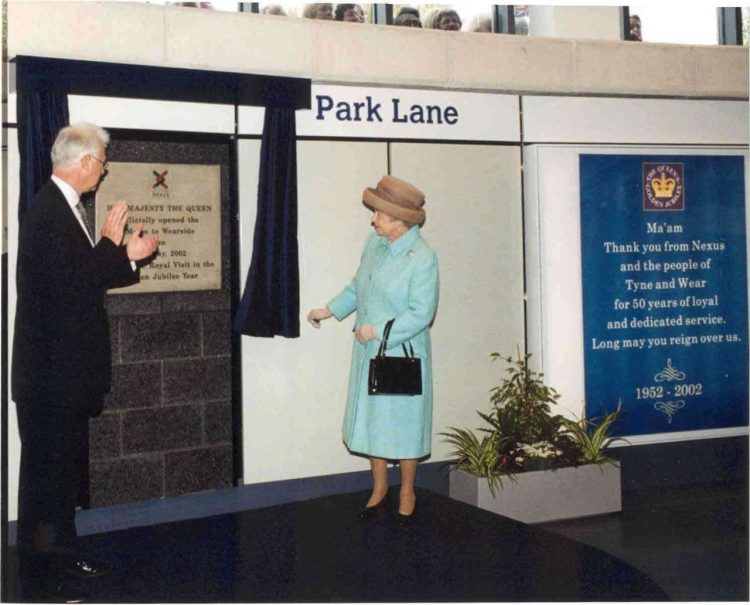 Former Metro boss tells of his pride in expanding the network to Sunderland and recalls his memories of the Queen’s visit to Wearside to open the new line.

From 1994 to 2006, Mike Parker was Director-General of Nexus with his time at the helm seeing the £100m network extension to Sunderland, which was opened by the Queen in May 2002.

Now retired, Mr Parker lead the Sunderland Direct project during the latter end of the 1990s and saw it through from the bid stage to its opening and operation.

“It was the biggest project that Nexus had been involved in for decades, and it was a project that was long overdue.

“People in Sunderland really wanted the Metro in the city. It was a project which had been looked at in the early 1990s but when I came in I felt that we had paid lip service to the idea.

“There was some good work done before I arrived as director general in 1994 and after that it moved up the political agenda and we looked seriously at the potential for new Metro routes.

“It was eventually decided to use the existing lines to run Metro into the centre of Sunderland and we won a combination of Government and EU funding to make it happen. It was a huge project and certainly the biggest in my 12 years in charge of Nexus.

“A lot of people worked on it. It was my role to secure the political and financial support for it, through government and through Europe. I had the task of getting the government at the time to say ‘yes we are going to back this’. We had to do a lot of lobbying and when that was successful we had to negotiate it all of the plans with Rail Track (now Network Rail) and the Rail Regulator.

“Once all of the negotiations were completed it was a very much the job of our project team to deliver the construction phase.”

The Sunderland line first saw passenger operations on the 31st of March 2022 on the new route with the Royal opening ceremony taking place at a later date on the 7th of May 2002.

Mr Parker was one of the people who got the opportunity to show Her Majesty around on the day which saw hundreds of local schools attend to wave at the Queen as she made her way on the Metro in Sunderland.

“It was a very proud day for the Tyne and Wear Metro and for Sunderland, and Her Majesty was terrific.

“It was the Queen’s Golden Jubilee in 2002 and the palace went to all areas of the country to look for interesting events. The Lord Lieutenant in our region was looking for some engagements that Her Majesty could attend in the North East, and the opening of the Metro extension to Sunderland was one the ones that leapt out.

“My role on the day of the visit was to greet the Queen when she arrived at the new Park Lane Interchange. I had to do a short speech before Her Majesty unveiled the plaque and I had made sure that I’d practiced it for numerous days in advance. I wanted to make sure I delivered it correctly on such a big occasion I had my wife, Judith, there watching along with all of the staff I introduced to the Queen.

“Both myself and the transport authority chairman at the time, Cllr Danny Marshall, then took the Queen down to the platform at Park Lane, where we boarded a special train for a trip on the new Sunderland line up to Fellgate.

“The train didn’t stop on the route but it slowed down as we went through each station so the Queen could wave to the school children we had arranged to wave at her from the platforms. The Queen seemed to have a sixth sense of when and how to wave a we went by.

“Cllr Marshall and I sat with Her Majesty on board the train. The Queen was remarkably informal on the journey and we chatted about a number of different things. A we passed the Stadium of Light football ground. Said that this place and was a shrine for Sunderland fans. The Queen commented that she was heading to a visit at the West Ham football ground Upton Park.

“There was a lovely moment when the train went by some pigeon lofts and the Queen mentioned told me that she kept racing pigeons at the Sandringham Estate, and that her pigeon keeper was the son of an Italian cream seller. It was remarkable. I was quite surprised at how easy it was to talk to the Queen on that short train journey.

“When the train got to Fellgate there was a car waiting for Her Majesty to take he to her next engagement at a school in South Tyneside. We all got off the train and had to go down in the lift. It was a funny moment really, as we were told we must have an engineer on standby in case the lift broke down. When the doors opened me, and Cllr Marshall got in the lift with the Queen, a member of the Royal protection team, and her lady in waiting.

“I remember thinking to myself that if this lift gets stuck it would be really bad for Nexus and the press would really for that angle. I also couldn’t help but allow myself a little chuckle at what it might be like if we had of got stuck in a lift with the Queen, even though we didn’t want it to happen. Thankfully the lift worked fine and the visit concluded on time.

“The stand-out moment was getting into the lift with the Queen, and my abiding memory from the day was how much we chatted with Her Majesty when we were on the Metro. It was for almost all of the journey. It was a really good day.”