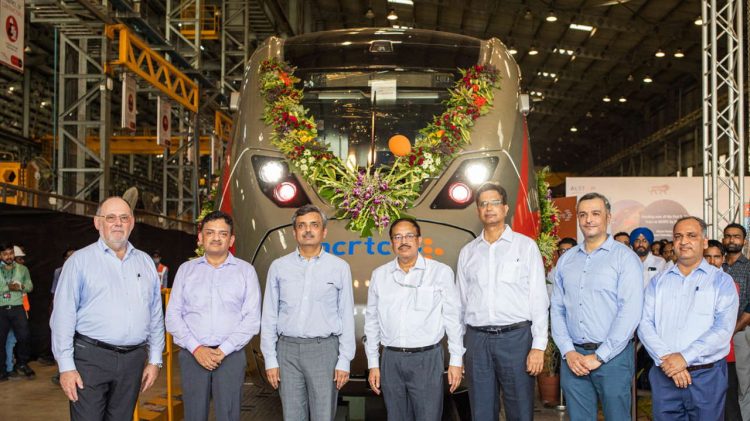 The semi-high-speed sleek trains can operate at speeds of 180kmph and are expected to cut travel time by 40% between Dehli and Meerut. The innovative trains are energy efficient and will provide customers with excellent comfort and safety features making for a superb passenger experience for commuters and accessibility.

“It is a proud moment for all of us to witness the rollout of the RRTS trainset, which is a true manifestation of the Hon’ble Prime Minister’s vision of an ‘Aatmanirbhar India’. Designed in India, made in India, made for India – it is the perfect demonstration of the PM’s Make in India initiative. It is imperative that we plan efficient public transport to fully harness the potential of our metropolitan cities so that we truly make them the engines of growth for tomorrow’s economy.”

“We are proud to reach another key milestone in making India’s first semi high-speed regional commuter service a reality. The RRTS project is one of the most ambitious ventures in India’s mobility sector and will prove to be a game-changer in India’s regional rail segment.”

“We are proud to reach another key milestone in making India’s first semi high-​speed regional commuter service a reality. The RRTS project is one of the most ambitious ventures in India’s mobility sector and will prove to be a game-changer in India’s regional rail segment. Our trains and ETCS signalling systems will ensure safer and seamless intercity commutes, benefitting millions of people and contributing towards socio-economic development. Delivering the first train within a year of commencing production, reinstates Alstom’s commitment to revolutionise India’s rail networks. We are honoured to be the preferred partner in delivering ground-breaking sustainable technology solutions that cater to the transportation needs of India’s future.”

“I am extremely happy to witness the rolling out of the first RRTS trainset, today. With its extensive experience in delivering world-class sustainable mobility solutions globally, Alstom has contributed significantly to make this project a reality. As a mechanical engineering myself, I’m impressed to see the advanced facilities set up here by Alstom. This train is a shining example of our commitment to support the PM’s ‘Make in India’ mission. With the Indian government’s ambition to build mass rapid transport systems across the country, we are elated to be contributing towards the development of this ecosystem in India and accelerating the ‘Aatmanirbhar Bharat’ vision.”

The train has been designed using Alstom’s Hyderabad engineering centre seeing manufacture at Savli (Gujarat) and originated fully in line with the Indian government’s Make in India programme and Aatmanirbhar Bharat’s ambition.

Alstom’s factory in Maneja (Gujarat) saw the manufacture of the propulsion systems and the electrics with the Savli site producing bogies and car bodies alongside testing. The Savli site has also seen the delivery of trains for the Dehli Metro, Queensland Rail and is producing metro trains for Kanpur and Agra cities at the moment.

2020 Saw Alstom awarded with a €436m contract which includes:

The first train design was influenced by Delhi’s well-known monument the ‘Lotus Temple’ and was revealed back in September 2020. The manufacturing process got underway in early July 2021 with the first train delivered in less than a year.

The RRTS line is the very first in India to take on the European Train Control System (ETCS) hybrid Level 2 signalling system which is the core signalling and train control component of the European Rail Traffic Management System (ERTMS).

The contract also acts as a world premiere for bringing together the latest ETCS standard, supported by the latest digital Interlocking and Automatic Train Operation (ATO) over Long Term Evolution (LTE) radio. At InnoTrans 2022 to be held in Berlin in September, Stadler will be presenting seven vehicles featuring sustainable...