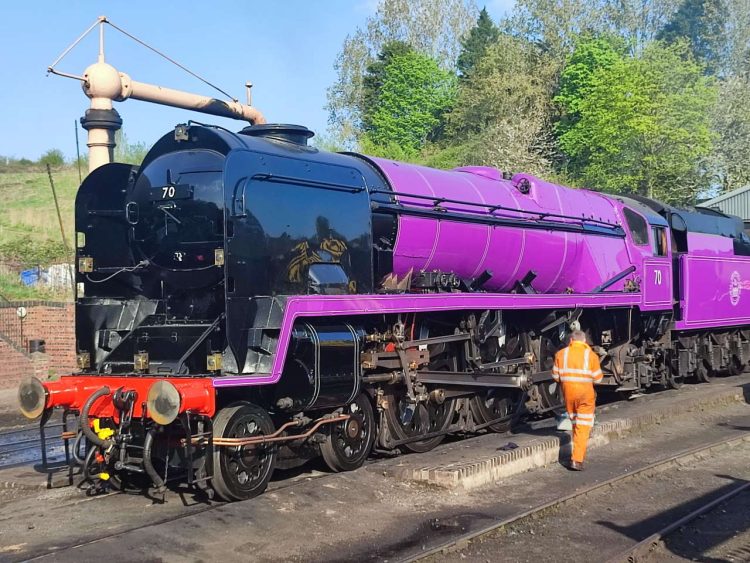 The Severn Valley Railway is allowing free travel to everyone called Elizabeth throughout its special Queen’s Platinum Jubilee event in early June.

Anyone called Elizabeth can pre-book their free tickets at http://svr.co.uk or buy a ticket on the day. They must be travelling with at least one other fare-paying passenger and provide a photo ID at the booking office in order to travel. Full terms and conditions are on SVR’s website.

The SVR’s Platinum Jubilee event takes place from Thursday, 2nd to Sunday, 5th June, as the railway joins with the nation to celebrate the historic and momentous occasion across the extended bank holiday weekend.

The undisputed star of the show will be the railway’s now-famous Bulleid West Country class No. 70 Elizabeth II. It will receive its new nameplates on Thursday, 2nd and be in service throughout the event. The loco has been specially repainted, renumbered and renamed in honour of the Queen’s Platinum Jubilee, and has caused a stir around the world with its unique, head-turning purple livery.

On Thursday 2nd, locomotives will sound their whistles at Kidderminster and Bridgnorth as town criers make a special Queen’s Platinum Jubilee proclamation. On Thursday evening, diners will be transported to The Engine House at Highley for a Beacon Banquet (extra charges apply), at which the SVR’s beacon will be lit at the same time as thousands of others across the world.

During the weekend, the appropriately-named Saint Class No 2999 Lady of Legend will be making its final appearances at the SVR before it returns to Didcot Railway Centre.

Special events during the Jubilee weekend include:

All of the SVR’s stations will be festooned with bunting and feature floral displays themed around the Jubilee, and each visitor will receive a special-edition ‘seeded’ ticket to take home and plant.

The idea received a warm welcome from Elizabeth Williams, who’s been visiting the SVR for more than 30 years with her husband David, a longstanding volunteer. “This is a lovely gesture from the railway, and I think that lots of people who share my name will want to take up the offer and visit for this special occasion. It looks like it’s going to be huge fun, and it’s not every day you get something like this just because of what you’re called!”

Michael Dunn, head of SVR’s visitor experience, said: st“This is all about celebrating the longest-reigning British Monarch ever. And we wanted to extend that even further to all those whose first name is Elizabeth – or Elisabeth! I think the Queen herself might just be a bit busy over the bank holiday weekend, but of course she would be very welcome to come and claim her free ticket!”

35018 British India Line will pass through Preston and Ribblehead this Tuesday, 14th June 2022.