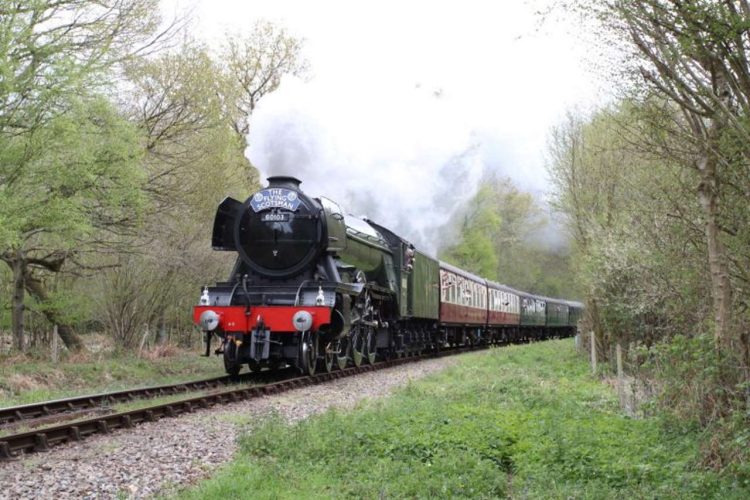 The world’s most famous steam locomotive, the Flying Scotsman, is to visit the Bluebell Railway at the end of August.

The railway has lined up some exciting plans for Flying Scotsman’s visit, including running the loco on regular services and special dining trains; details of those will be announced later this month.

Flying Scotsman will be running non-stop return services between Sheffield Park and East Grinstead for five days from Thursday, 25th to Monday, 29th August. Owing to the expected demand, all seats must be pre-booked in advance.

The locomotive will also be on static display at Sheffield Park from Wednesday, 17th to Wednesday, 24th August and from Tuesday, 30th August until Monday, 5th September. Tickets for visits to Flying Scotsman’s footplate will also be available.

The locomotive is currently in the final stages of an overhaul by Riley & Son (E) Ltd of Heywood in Lancashire, who are restoring the locomotive to the same standard as its last overhaul in 2016. Work has focussed on the boiler, the required retubing, and re-certification. There will not be any changes to the locomotive’s livery, numbering, or chimney configuration.

The overhaul started in April 2022 in readiness for the locomotive’s centenary celebrations in 2023. The visit to the Bluebell Railway will be one of the first chances to see the famous engine following its overhaul.

The Bluebell’s full timetable, which includes the Flying Scotsman and trains using locomotives from the railway’s ‘home fleet’ can be viewed here.

To book travel, dining, or running viewing with or without non-Flying Scotsman train travel are available from the ‘Book The Flying Scotsman in Steam Tickets‘ page on the railway’s website here. The Embsay and Bolton Abbey Railway has announced that they will be welcoming L&Y A Class No. 52322.