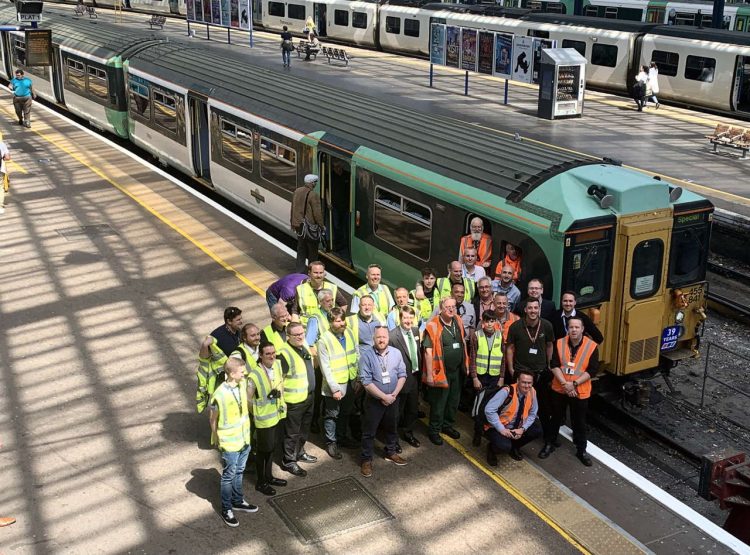 The farewell tour for charity Mind, was the last run by Southern’s 40-year-old Class 455 fleet.

Over 500 train enthusiasts joined representatives of the charity on a day-long journey. Southern’s Class 455s have been replaced by more modern Electrostar trains, on which passengers will benefit from air conditioning and toilets that the older carriages lacked.

Southern’s parent company Govia Thameslink Railway (GTR) invited members of the public to buy tickets for a Farewell Tour on a specially chartered 455, with proceeds going to the local Mind association for Croydon.

The tour rounded off a programme of activities in Mental Health Awareness week. It promoted Mind’s work in combatting mental health issues and collected donations to support that work. A raffle, sales of books and badges, and an auction of railway memorabilia, further boosted the funds raised from ticket sales and cash collections.

Beginning and ending at London Victoria, the rail tour took the train on a 10-hour trip through over 70 stations in South London, Surrey, and Sussex and included a lunch stop at Brighton.

Phil Nacmanson and Antony Yandell of GTR’s train operations management team came up with the idea to give the fleet a substantial send-off that would recognise its outstanding years of service. They sounded out other GTR teams, and with their enthusiastic support recruited the rail enthusiasts’ tour operator, the ‘Branch Line Society’ (BLS), to market the tour as a charity fundraising event.

At least 25 individual GTR colleagues, from as far as York, Leeds, Birmingham, and Portsmouth, pledged their time to plan and run the tour. During the tour, the BLS provided onboard stewards to look after passengers alongside onboard GTR staff.

Southern chose Mind in Croydon as a beneficiary because the mental health and wellbeing it supports are one of the company’s key priorities for community relations activity. In recent years, Southern and Mind have been working together at East Croydon station on successful partnership projects initiated by Station Manager Ramla Abshir-Slevin.

“I’m very proud to have been part of this well-deserved send-off to mark the Class 455s’ four decades of service and delighted that the money raised for Mind was way above all our expectations.

“Many people played vital roles and deserve a huge thank-you – Phil, Antony and their operations management team, the train planners, engineers, station teams, colleagues at Southeastern and Network Rail, the Branch Line Society, our charity partners, and the hundreds of enthusiasts who joined us to make it such a special, successful day.

“We hope this event will be a springboard to further partnership opportunities with Mind in Croydon, working together on our shared aim to combat mental health issues and promote the importance of wellbeing in our communities.”

“We’re extremely grateful to GTR and everyone who made the day such a joyful and successful event. This phenomenal total of £26,000 is a wonderful achievement and greatly appreciated. We’ll use the much-needed funds raised to innovate and create new and exciting projects and services supporting our mental health clients and their carers.”

Transport for London (TfL) will reinstate Northern line Night Tube services from the evening of Saturday the 2nd...