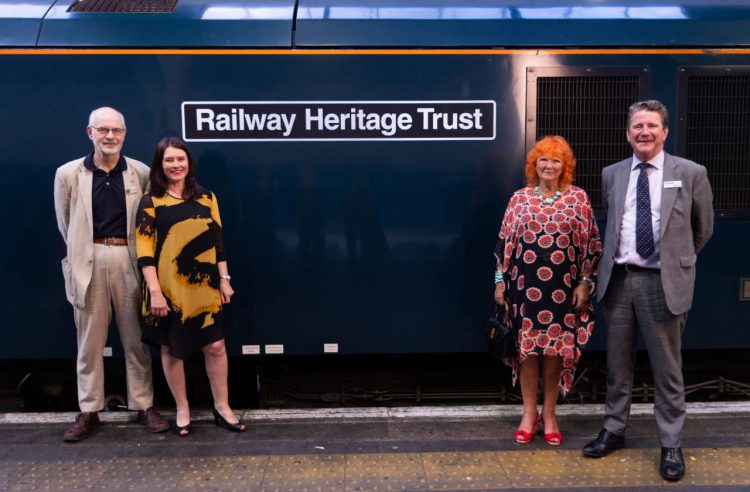 Caledonian Sleeper has named one of the locomotives that hauls its services between London and Scotland in honour of the Railway Heritage Trust.

The naming is in gratitude for the Trust’s support for the company’s major restoration project at Perth Station, which is a listed building dating back to 1848.

Perth station was designed on a grand scale in keeping with the Tudor Gothic style of the time, but its vast size was unsuited to modern practices, and many rooms were lying empty.

The interior décor of an unused waiting area has been restored by Caledonian Sleeper to create a luxury guest lounge for its passengers as well as a staff training centre. That has brought fresh life into the area by bringing it back into service. The Railway Heritage Trust provided a generous grant to help fund the refurbishment.

In recognition of this support, Caledonian Sleeper teamed up with GB Railfreight, which operates the fleet of Class 92 engines that haul the company’s overnight rail service, to name one of the engines in honour of the Trust. A plaque marking the occasion was unveiled on the engine at London Euston.

“We’re honoured to be naming one of the Class 92’s after the Railway Heritage Trust and proud to have worked with the Trust on our restoration project at Perth Station.

“It’s incredibly important that we protect the heritage features of the UK’s iconic railway network, while also ensuring the network is fit for use in the 21st Century, so it can be enjoyed for many years to come.”

‘We are deeply grateful to Caledonian Sleeper and to GB Railfreight for allowing one of their Class 92 engines to carry the Railway Heritage Trust name.”

“The Railway Heritage Trust operates across the whole of the Network Rail system, and it is appropriate that a locomotive that operates on the longest-distance services on the network carries our name to such a wide range of locations.”

“We share the Railway Heritage Trust’s ambition to protect the UK’s historic railway network while modernising the vital infrastructure we all rely on.

“Given the cultural significance of Perth Station, we’re grateful for the support they’ve provided to Caledonian Sleeper and are proud to have one of our Class 92 locos carry the Trust’s nameplates.”

Monday the 23rd of May 2022 will see the re-opening of Reston Station in the Scottish Borders for...