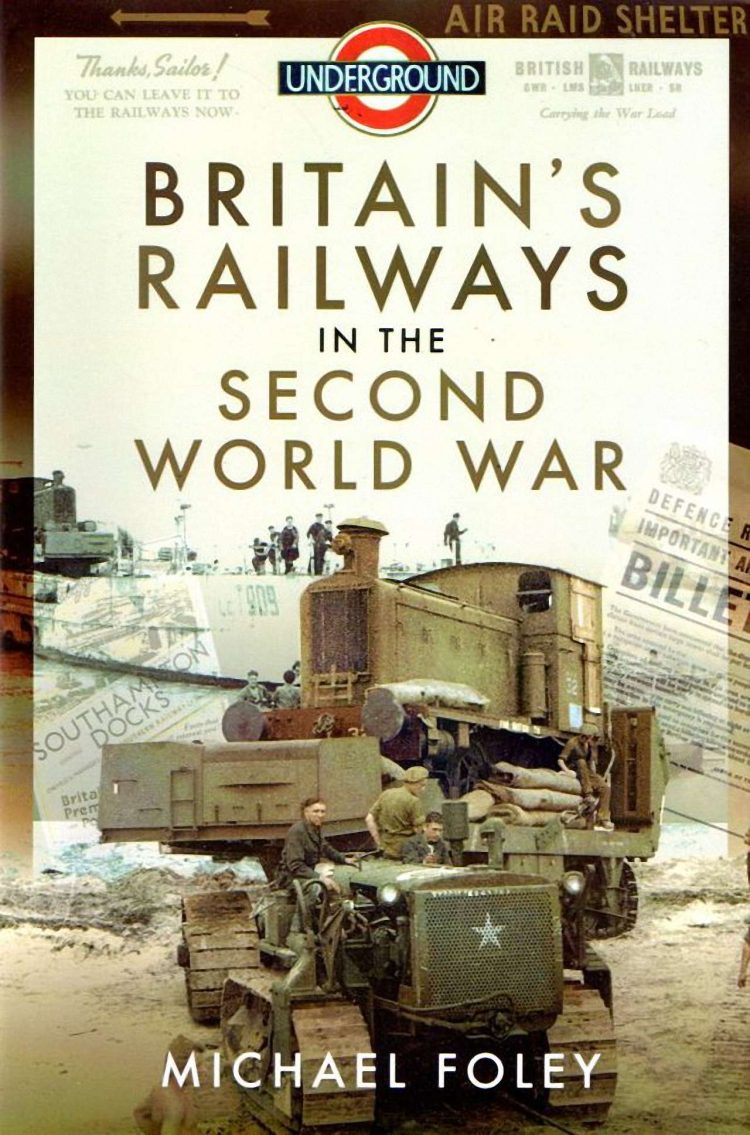 Published in November 2021, this book from publishers Pen & Sword provides a history of Britain’s Railways in the Second World War, focussing as much on the memories of those involved as the actual operations of railways in wartime.

With an Introduction, 11 chapters, and two appendices this book describes wartime events in chronological order.

Chapters 1 and 2 give a brief insight into the part played by military railways in wartime, going right back to the Crimean and Boer Wars, and Britain’s railways before the Second World War.

Chapters 3 to 9 take a chronological approach, with each chapter dedicated to a particular year from 1939 to 1945. I was rather confused by the purpose of chapter 10, “Reflection” as it didn’t seem to add anything to the narrative, whilst the last chapter, not numbered but titled “Afterword” and sub-titled “Heritage Railways”, refers to the connections that a few of today’s preserved railways have with events in WWII, although the selection of railways mentioned seemed rather haphazard.

Rather than just concentrating on the Second World War, the book starts off by looking at the part played by military railways in wartime, going right back to the Crimean and Boer Wars. While interesting in themselves, they don’t add anything to how Britain’s railways functioned during the Second World War.

Of particular interest are reproductions of posters that appeared around the country during the war, informing the public how the railways were playing their part. I was intrigued by how these often referred to “British Railways”, years before the term became synonymous with Britain’s railways.

Taken as a whole, this is a fascinating account of the important role that railways played in the defence of Britain. It is as much a story about the trials and hardship that both the public and railway workers went through, as well as the operating difficulties of the railways themselves.

The book includes several photos of war memorials, such as the one on the left below at Manchester Piccadilly.  On the right is a scene that would be a welcome sight to soldiers returning from Dunkirk; this is one of the relatively-few photographs of the railways during the war.

Here we see one of the posters included in the book. Although this one was issued by the Railway Executive Committee, it makes reference to “British Railways” years before the company came into existence.

As is happening now in Ukraine, Britain’s railways in WWII were prime targets for enemy bombing, as seen on the left-hand page. On the right is an American locomotive being unloaded on a Normandy beach.

The author has also chosen to write about a selection of incidents that, while interesting in themselves, do not contribute to the story of how Britain’s railways functioned during the war.

In some cases, lists of engine types and production figures detract from the narrative, and some sections seem to be repeated, especially the roles of women in wartime and the background of the austerity locomotives.

My main impression of the book was that in what could have been a useful volume, there are too many errors that should have been picked up during the proofreading stage. Just a few of these are: several instances of GWS for GWR; lack of information on some captions such as a photo of damage to a London station, when it is clearly of Paddington station with a GWR pannier tank in the photo and a well-known view of the girder bridge that straddles the lines just outside Paddington station; and a photo of David Blake standing in front of an LMS Ivatt locomotive built at Crewe, but the photo is of an LNER Ivatt Atlantic built at Doncaster and there’s no reference in the text to who David Blake was.

The book misses an opportunity to explain the problems the railways faced in operating during wartime and why trains of massive lengths and tonnage often ran.