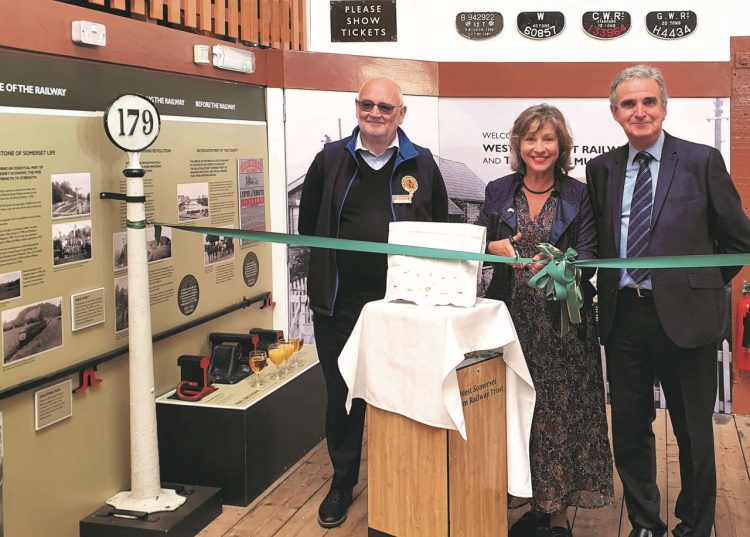 A new interpretation of the Gauge Museum at Bishops Lydeard station on the West Somerset Railway was formally opened on Saturday, 21st May by Rebecca Pow, MP for Taunton Deane at a ceremony attended by selected guests.

The National Heritage Lottery Fund and the West Somerset Railway Heritage Trust funded the new displays and interpretations. It is the realisation of a three-year project carried out by trustees and volunteers, and was finished last year, but the formal opening had to be delayed because of Covid 19.

Around £60,000 was invested in the new displays, with an increased number of historic items, together with interactive material and activities. A unique 125-year-old GWR sleeping car is still the centrepiece of the museum, but has been enhanced with Victorian costumes and exhibits from the period.

Rebecca Pow said: “I am delighted to have been asked to reopen the Gauge Museum because preserving our railway heritage and celebrating the role of the West Somerset Railway as part of our local community through this insightful museum is an excellent achievement, and I commend the Trust for developing this initiative.”

Jon Jones-Pratt, WSR company chairman, said: “The Heritage Trust has done a fantastic job to enhance the Gauge Museum as a key attraction on the WSR. A lot of hard work has gone into the project and we encourage visitors to go and visit the range of new and improved displays and artefacts that the museum has to offer”.

Heritage Trust chairman Mike Thompson said: “The completion of the Gauge Museum project marks a real milestone in the achievements of the Heritage Trust.

“I would like to thank all the trustees and volunteers who have worked tirelessly over the last three-and-a-half years to bring such an impressive achievement to fruition. We also thank the National Heritage Lottery Fund for their contribution and support, and we look forward to visitors and staff enjoying what is a real celebration of the history and heritage of the West Somerset Railway.”