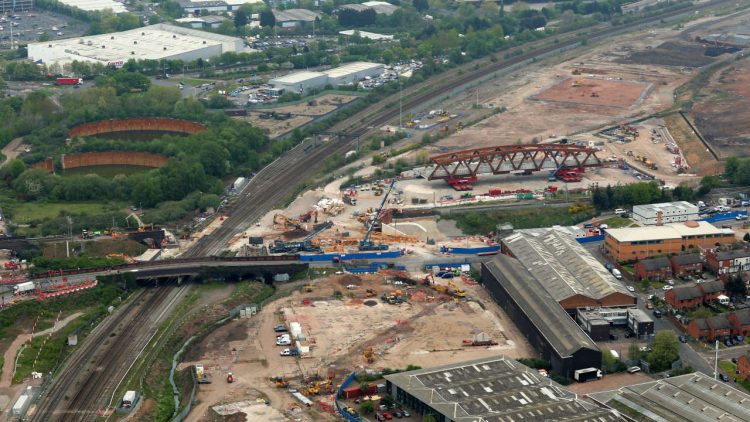 This weekend, Saturday 7th and Sunday, 8th May, a new 92-metre-long railway bridge will be installed in Birmingham, and will become the longest single-span railway structure in the West Midlands.

During the weekend, and on further weekends in May, CrossCountry services between Birmingham New Street and Coleshill Parkway will be replaced by rail replacement buses. Passengers should plan their journeys in advance at www.nationalrail.co.uk or visit CrossCountry’s dedicated webpage here.

Network Rail in partnership with HS2 will be installing a new bridge in Stechford so that Britain’s new zero-carbon railway can pass underneath it.

The new bridge replaces an old railway viaduct on the Stechford to Aston freight line which was demolished over the Early May Bank Holiday.

The new structure is known as the SAS 13 bridge and weighs 2,600 tonnes. It has been pre-assembled by contractor Skanska over the last 22 months in a huge compound beside the existing railway lines. This construction method reduces carbon emissions and cuts the number of lorry movements on local roads, minimising impacts on the local community.

This coming weekend 18 huge remote-controlled vehicles, known as Self Propelled Modular Transporters (SPMT), will drive the new bridge into place before tracks are re-laid so trains can run again on Monday 9 May. Each SPMT has 24 wheels, meaning 432 wheels will carry the load when the bridge is driven into its final position.

Patrick Cawley, director for ‘On Network Works’ for HS2 and Network Rail, said: “Moving this 2,600-tonne bridge into place is no mean feat and the new structure will ensure Britain’s new zero-carbon, high-speed railway HS2 works in harmony with the existing rail routes into the second city.

“As you’d expect from such a complex engineering project, CrossCountry passengers will see changes to their weekend journeys in May. I’d urge people to please check before they travel using the National Rail Enquiries website or app, and I thank everyone in advance for their patience while we help build this railway for the future.”

Rosario Barcena, Skanska Rail programme director, said: “We’re extremely excited to be working with Network Rail and HS2 to deliver the SAS 13 bridge replacement project. This project will deliver the largest single-span railway bridge in the West Midlands, improving connectivity and paving the way for the HS2 route into Birmingham City Centre.

“We have designed and constructed the bridge to deliver value for money, reduce impact to the environment and disruption to the local community. The bridge has been fabricated on-site, cutting carbon emissions and reducing vehicle movements to and from site. We’re looking forward to seeing it in operation.”

Further major work will be taking place at weekends in August and early September.

Birmingham New Street to Leicester and stations to Peterborough, Cambridge, and Stansted Airport

Scotland and the North East to the South West