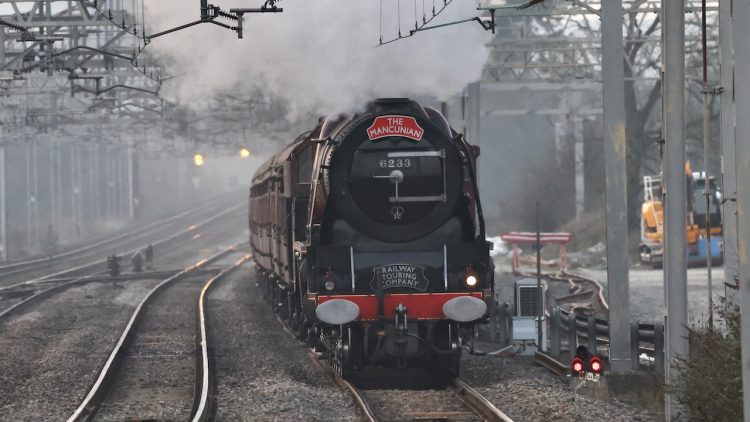 In this short video, RailView are out on the West Coast Mainline at Rugeley Trent Valley, Staffordshire for LMS Princess Coronation 6233 Duchess of Sutherland & GWR Castle 7029 Clun Castle racing southbound on the WCML for a rare occasion seeing two steam locos would pass through a station within 10 mins of each other!

The film starts with 6233 Duchess of Sutherland taking the return leg of The Mancunian from Manchester Victoria to London Euston where she is seen on home turf cruising along at speed.

7 Minutes later, we see what we believe was our highlight, 7029 Clun Castle storming through at 18:30 running 2 mins late, also at speed, making an almighty racket as she takes the return leg of The Chester Venturer from Chester to Tyseley Steam Trust via the East Midlands (The Leicester Circular) and certainly showcasing at her best shaking the floor throwing sparks on the platform and making for one of the best at speed performances we have ever seen!

Overall, a brilliant trip out to a Rugeley Trent Valley for RailView to witness this rare occasion, which locomotive performance was your favourite?

You can watch the video below: