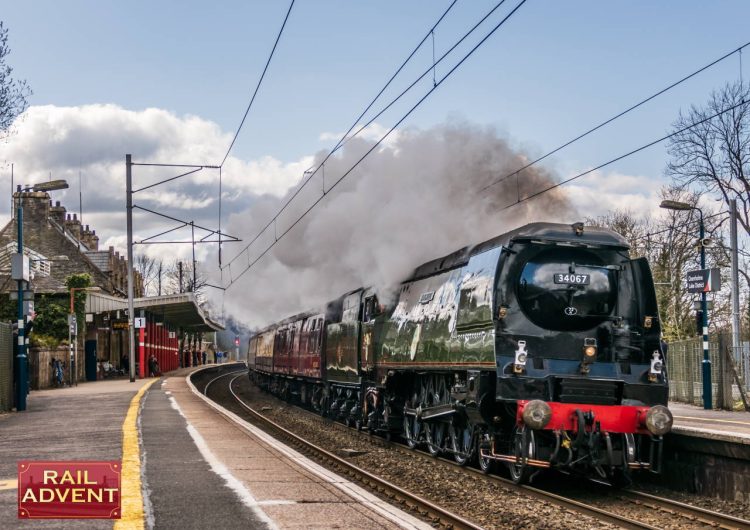 In this short video, RailAdvent were out and about on the West Coast Mainline once again to film SR Battle of Britain No. 34067 ‘Tangmere’ steam through Oxenholme Lake District with The Northern Belle to Carlisle.

On the 2nd April 2022, SR Battle of Britain hauled her 2nd Northern Belle excursion since returning to the mainline.

34067 Tangmere would take over at Carnforth on The Northern Belle’s York to Carlisle excursion and is seen here at Oxenholme Lake District heading for Shap.

The film starts at Oxenholme Lake District with a TransPennine Express Class 397 operating a Preston to Carlisle service, which was operating a short route due to the West Coast Mainline being closed south of Preston due to engineering work.

We then see the Battle of Britain locomotive working up the grade to its eventual summit at Shap. It was running a few minutes late after an RT departure from Carnforth.

With 6201 Princess Elizabeth out of action, 34067 Tangmere is the sole locomotive for 2022’s Northern Belle steam trips so there will be plenty of time to catch up with her if you have missed her so far. As a RailAdvent Plus member, you will get direct notifications on tour allocations and timings so you wont miss a tour. Find out more here.

What do you think of Tangmere? Let us know in the comments below.

Northern maps out locations of blue plaques across its network