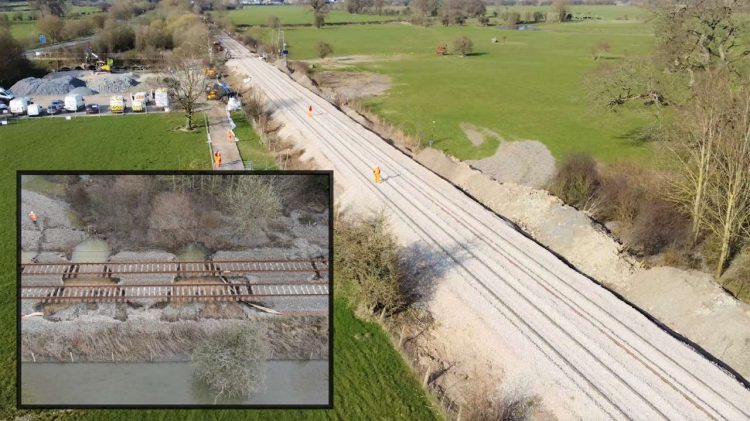 Storm Franklin on Monday, 21 February caused extensive flood damage to the line, which had to be closed to allow vital repairs to take place.

It was initially thought that ballast had been washed away in just 12 areas, but further investigation revealed 33 locations had been severely impacted across a half-mile stretch of railway.

The washouts happened after the River Severn flooded, and the water rose to 3.9 metres above normal level, just 9 cm lower than the highest level ever recorded. It took ten days for the river to recede fully before engineers could move in to repair the railway.

Transport for Wales planned to resume some passenger services on Saturday, 2nd April, with a full rail service starting on Sunday, 3rd April.

In March, Network Rail announced millions of pounds of emergency funding to further protect this section of the line. Engineers are currently working on a resilience solution for this section of the railway that will see rock armour installed along the embankment.

Other resilience work on the Cambrian Line in recent years includes raising Black Bridge, near Machynlleth, away from a flood zone. Before that work was completed, the bridge had been closed for emergency repairs caused by flood water 30 times in the last decade, with ten times in 2020 alone. Since the completion of the work, the railway at this location has not succumbed to flooding or been closed because of bad weather.

Bill Kelly, route director for Network Rail Wales & Borders said: “It’s fantastic to be able to fully reopen the Cambrian line for passengers, after the scenes of absolute devastation left in the wake of Storm Franklin.

“I’d like to thank passengers, and the local community, who’ve shown incredible patience and support, throughout. I’d also like to pay tribute to everyone who’s worked so hard to repair the railway so quickly in such challenging conditions – it really has been an incredible effort.”

Martyn Brennan, Transport for Wales Operations Director, said: “We would like to thank our customers for their patience while this essential work has taken place and we look forward to returning to a full service on the Cambrian Line from Sunday 3 April.”

Claire Williams Partnership Development Officer from the Cambrian Railway Partnership said: “We are delighted to see that the vital link for connectivity to Shrewsbury and beyond on the Cambrian Line has been resurrected in good time and in readiness for the high demand of services over the Easter holidays.

“We would like to thank our colleagues at Network Rail for their tremendous effort to reopen the line as soon as possible given the challenging conditions and devastation of the line outside Welshpool.”

Official Trailer and Poster released for The Railway Children Return