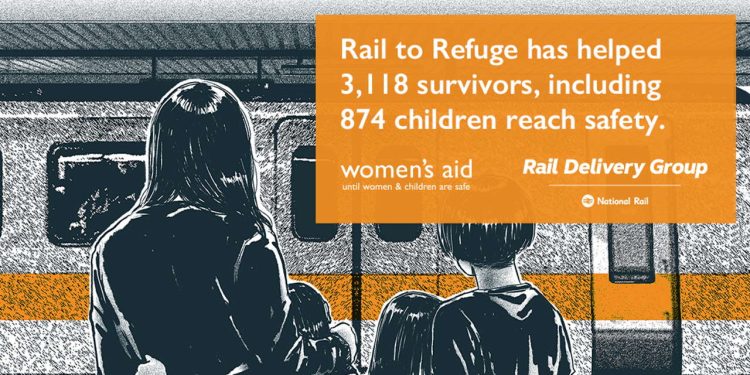 Train operators are renewing their ‘Rail to Refuge’ scheme that helps victims of domestic abuse to escape danger and reach safety.

Rail to Refuge is a joint initiative between rail companies and Women’s Aid where train operators cover the cost of train tickets for women, men, and children to travel to safety at refuges. All train operators in Great Britain took up Rail to Refuge in April 2020, initially for the length of the first lockdown, before subsequent extensions.

With the scheme now having reached its second anniversary, operators are pleased to confirm a further continuation of the funding required, securing its future.

Rail to Refuge has received much acclaim, including from HRH The Duchess of Cornwall, who met representatives of the rail industry and Women’s Aid at Victoria Station last year. Her Royal Highness was full of praise for the scheme as she met Southeastern’s Darren O’Brien, who first proposed the idea, and she described it as a “brilliant initiative”.

Since its inception, train operators have provided free tickets to 3,118 people, including 874 children. Of those who have used Rail to Refuge, 65% said they would not or could not have travelled if the journey hadn’t been paid for; the average journey cost for recipients was £73. On average, four people make use of the free travel offer every day.

When domestic abuse survivors are offered a refuge place, they are supported by Women’s Aid members’ services which can book the ticket(s) they need. Train companies cover the cost of the tickets, and also children’s tickets if they are required.

Tickets can be made available as e-tickets on a phone or picked up from stations with a debit or credit card. The scheme allows survivors to board a train and travel without having to explain their situation to anyone.
Andy Bagnall, Director General of the Rail Delivery Group, said:

“Rail to Refuge has seen train operators providing lifesaving travel every day for two years now – something that we’re proud to be able to provide and to be able to continue offering to those who sadly need it.

“Rail staff will continue to work hard to assist those in need, just as they support all of our passengers and help to make sure there is no unsafe space on the railway.”
Isabelle Younane, head of policy, campaigns and public affairs at Women’s Aid, said:

“We are proud of our partnership with Britain’s rail companies, and to announce the most recent passenger figures, which builds upon our December 2021 Import Report. These show just how many women and children’s lives have been saved through Rail to Refuge, so we are delighted that this vital scheme is continuing into its third year.

“These figures are, however, sobering- demonstrating the demand among survivors for affordable escape routes. We know that in situations of domestic abuse, survivors are often isolated from their finances, and therefore unable to flee their perpetrator. Rail to Refuge takes away these barriers and allows survivors to escape abuse and be brought to a place of safety and specialist support. It is a lifeline for survivors who would otherwise be trapped in abuse and at an increased risk of harm.

“We are grateful that train companies have worked with us to remove such a significant financial barrier to escaping abuse and hope to continue to work together to ensure survivors’ needs are prioritised and the scheme remains accessible, and with a secure future which is essential for the safety of survivors of domestic abuse.”