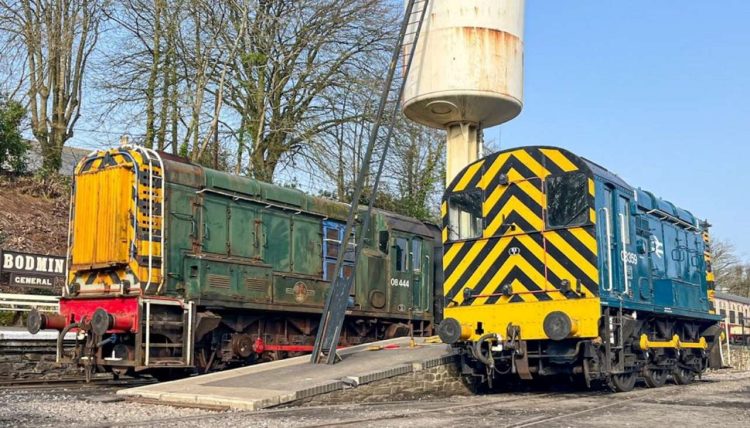 The Bodmin & Wenford Railway will be holding a special Gronk shunter day today, Saturday the 30th of April 2022.

The heritage railway is best known for its steam locomotives but also holds a proud diesel heritage and in order to celebrate this will be hosting a Gronk shunter day!

The Bodmin & Wenford Railway is at present a home for two Class 08 hunters the first of which is resident Class 08 08444 and visiting 08 08359. The event marks the last chance to see 08444 in service before its overhaul during which time 08359  will be taking on its shunting duties.

The Gronk shunter day will see the standard blue timetable in operation alongside a mixture of double-heading, top and tailing and single runs to give a special view of the loco’s hard at work hauling trains ahead of 08444’s withdrawal.

Malcolm Young, from the Bodmin Diesel Group, said “The Class 08s are the workhorses of the railways and were primarily used here to haul china clay rakes from the drys at Wenford. It has been over ten years since we last had the opportunity to run this type of an event,”

Visitors can buy all day rover tickets which will allow them to pay once and travel as much as they wish during the event. Tickets are available on the day.

Something for everyone this weekend at the Llangollen Railway

Passengers are able to join at Bodmin General if they want to visit the railway coming in from the mainline at Bodmin Parkway.

Tickets can be purchased from the Buffet at Bodmin Parkway as they are not available to buy on the train.

Leeds-Morecambe CRP publishes study into future of the Bentham Line A buffet housed in a disused signal box at Bodmin Parkway station has reopened after a major refurbishment.

Bodmin and Wenford Railway gear up for May reopening