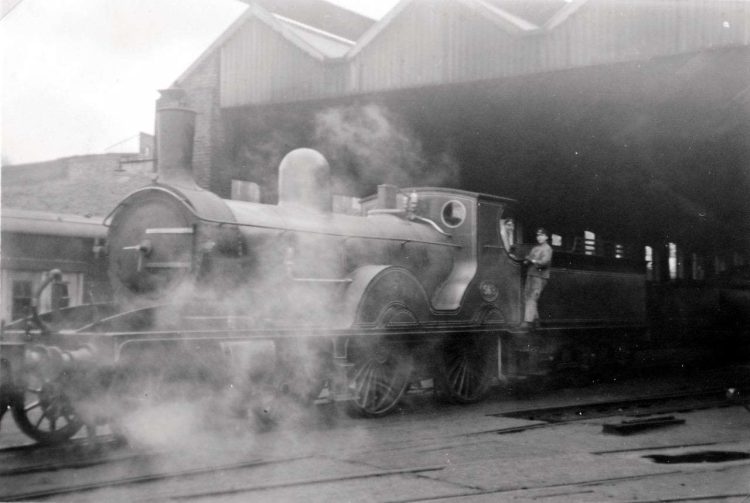 The Swanage Railway Trust has reported that they have reached their target of £25,000 to restore the tender of Adams 4-4-0 T3 Class No. 563 and the tender tank has now been lifted from the chassis to enable restoration to begin.

Further progress was also made during March on the re-assembly phase of the project.

The splashers have received their first topcoats of BS225 light Brunswick green paint, and the engine will look resplendent in its Drummond green livery.

At the Flour Mill workshops, the focus is on installing the inner firebox in the boiler. This is a complex task, but it is hoped to complete by mid-year. The boiler is the heart of a steam locomotive and as such, the key milestone in any restoration project. As such the trust is eager to see this completed so that a start can be made on putting everything back together. Given the generally good condition of the rest of the locomotive, that is expected to be a fairly straightforward task.

The expansion brackets have been riveted onto the sides of the outer firebox. These will eventually support the boiler in the frames, once it’s turned the right way up again. The aim is to have the boiler finished before the end of the year but there are still well over 800 stays that need to be made and installed to fix the inner firebox in place to finish this assembly.

This will be the last time that the inner firebox is outside of the boiler. It has been a huge piece of the puzzle and one that the team has focussed on since the overhaul first started.

With the boiler making steps towards completion, preparations are now being made for re-wheeling. The wheels are ready, so attention is turning to overhauling the axle boxes and bogie. The new springs have been fitted against the centre casting which help controls the side play of the bogie.

Other features such as the piston rods have been re-fitted, and slowly but surely 563’s unique characteristics are starting to come back again. It’s going to be really unusual and impressive to see these extending from the front of the cylinder covers with each stroke.

The reverser has a newly machined nut, but unlike the original, the new nut has additional oil ways to provide lubrication for the screw and between the sliding faces to reduce wear.

The tender tank has been separated from the frame in preparation for this being moved into Herston Works. Movement of the tender is awaiting the next road move in/out of Swanage to enable the tender to be moved at the same time. Meanwhile, contractors have been making further assessments to determine the repairs required to the tank. The Swanage Railway has today announced that GB Railfreight Class 69 No. 69004 will be visiting them this...