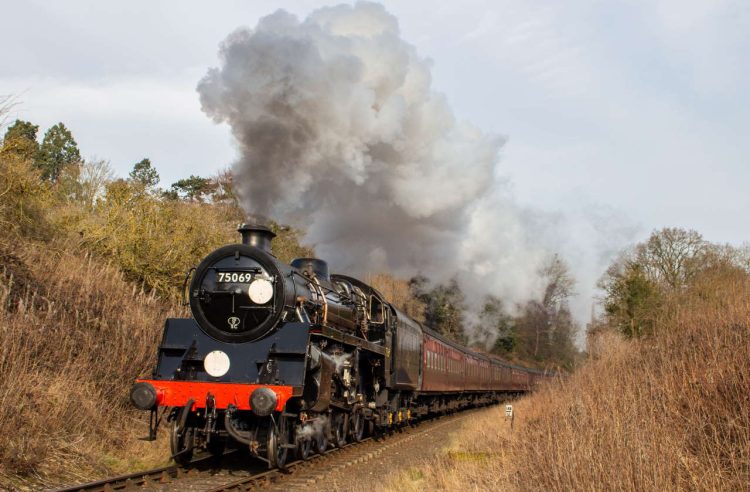 The West Somerset Railway has announced that BR Standard 4MT 4-6-0 No. 75069 will be visiting the line for this year’s Spring Steam Gala from Friday, 5th to Monday, 8th May.

This will be 75069’s first visit to the WSR for almost three decades. Built in 1955 at BR’s Swindon works, it  entered traffic at Dover. In 1960 it was fitted with a double chimney at Eastleigh and returned to traffic at Stewart’s Lane.

After just 11 years in service around London and the South Coast, the locomotive was withdrawn from service at Eastleigh in September 1966.

After visiting the WSR for a season in 1994, it was taken out of service and put into store until a major overhaul at the Severn Valley Railway (SVR) costing almost £1 million and involving more than 25,000 hours of work was completed.

This is the locomotive’s first trip away from the SVR since then. During next month’s spring gala, headlined ‘Return of Steam to Minehead’, 75069 will haul trains between Bishops Lydeard and Minehead alongside another guest locomotive, Caledonian Railway Class 439 0-4-4T 419 from Scotland, and the railway’s home fleet of locomotives.

During the gala, visitors can visit the engine shed and enjoy multiple steam locomotives in action operating to an intensive timetable. A variety of trains will be in operation, including:

The turntable at Minehead and the triangle and Norton Fitzwarren will both be in use. The weekend also marks the reopening of the Stogumber Cattle Dock.

WSR general manager Kerry Noble said it was again heading West from its home on the Severn Valley Railway (SVR). “We are very privileged to be No. 75069’s first host heritage railway since 2018. It last visited us 28 years ago so we are very pleased to have it back.“

c2c rail passengers urged to plan ahead this Easter