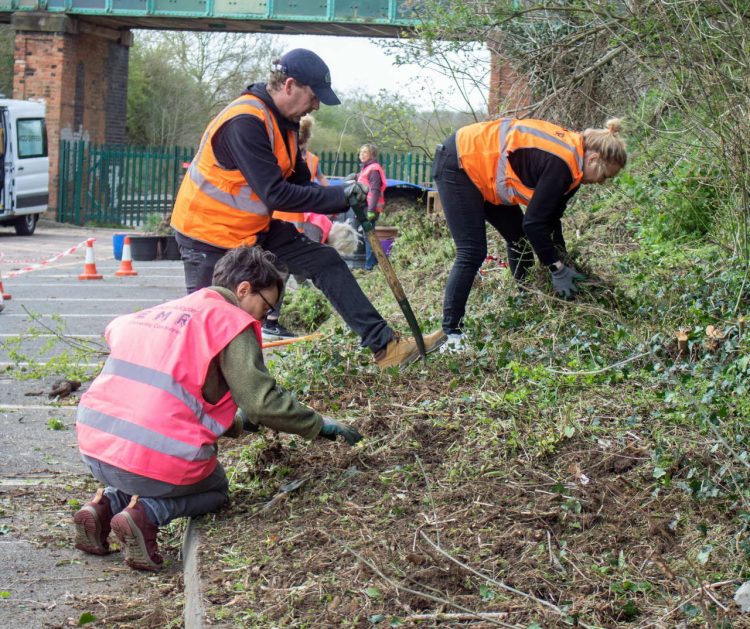 In 2021, construction company AmcoGiffen set up a compound using the station’s car park as it carried out tunnel improvement work for the Stamford area on behalf of Network Rail.

Due to the work being carried out, the Stamford station adoption group volunteers were unable to keep up their green-fingered efforts for the garden area.

AmcoGiffen and Network Rail were aware of this problem and promised that they would return in spring to help the station adopters in restoring the area.

The work is now finished and features many improvements for customers to enjoy whilst using the station’s facilities including two new wooden planters, a compost bin and the installation of a wooden sleeper barrier as a border to the garden to protect it from any vehicles.

The volunteer team were made up of station adopters, staff members from AmcoGiffen, Network Rail and East Midlands Railway also cleared weeds and rubbish as well as tidying up the current gardens, making them ready for spring with the planting of lots of bulbs and flowers.

Part of the day saw Ronan McGee from AmcoGiffen present a gift voucher of £200 to the station adopters which they intend to use to buy shrubs to create a garden in celebration of the Queen’s Platinum Jubilee. Future plans for the station also include a bug house and the installation of bird and bat boxes in the trees behind the garden in a bid to encourage wildlife.

“At AmcoGiffen we pride ourselves on being considerate neighbours. After carrying out lengthy tunnel strengthening work last year and using the area for our site compound, we promised to return in spring to make good. Working with the local adopters, EMR and Network Rail, we didn’t just return the site to its original state, we did more than that.

“Together, we created an amazing new garden area for the community to enjoy. We’re glad that we could show our appreciation to the local adopters and lineside neighbours in this way and we hope that everyone enjoys the new garden area for a long time.”

“Everyone’s hard work has really transformed the station car park. What was a wasteland has become a pleasing environment for wildlife and people. This was thanks to the efforts of the contractors from EMR and Network Rail and the team of Stamford Station Adopters.

“A sincere thank you to AmcoGiffen for the £200 voucher and many thanks to everyone who took part in this project.”

“We would like to thank everyone who gave up their time to help improve the station. It was a lovely gesture by AmcoGiffen and I’m sure our customers will enjoy seeing how the garden develops as we move into summer.”