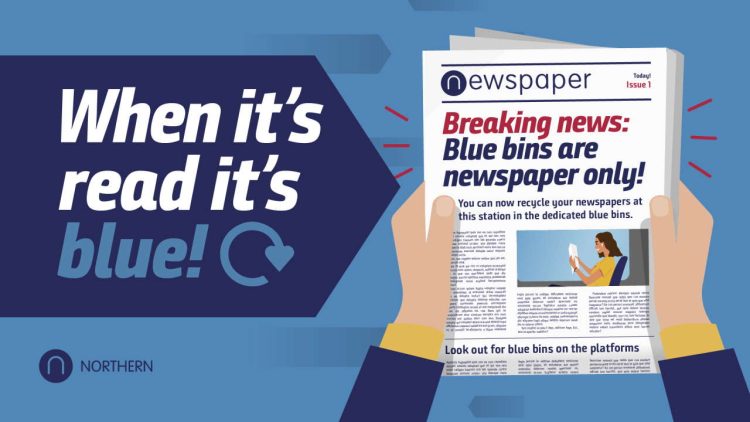 Northern is running a campaign to improve the recycling of newspapers at a number of stations across the North of England.

Blue recycling bins that are dedicated to the collection of newspapers have been introduced at ten stations across the train operator’s network.

Northern’s campaign is titled ‘When it’s Read it’s Blue’, and the company hopes that it will improve the recycling of newspapers at stations across the North of England. Oldham-based Pelican Communications created the campaign, which was launched at Manchester Victoria station on Monday, 6th April. It includes posters, floor vinyls, Metro news stand snap sheets, bin branding, onboard digital screens, and social media assets.

The goal is to educate train passengers that blue bins are exclusively for newspapers, in order to stop newspaper waste being contaminated with other rubbish.

Black-rimmed bins currently at all stations are for all other waste, including cardboard coffee cups, food wrappers, and rail tickets, which contain a metal strip, making them unsuitable for paper recycling.

Mike Roe, Northern’s safety and environment director said: “Northern is delighted to be rolling out this trial across the network so we can help stop newspapers from going to waste and help our customers to recycle.”