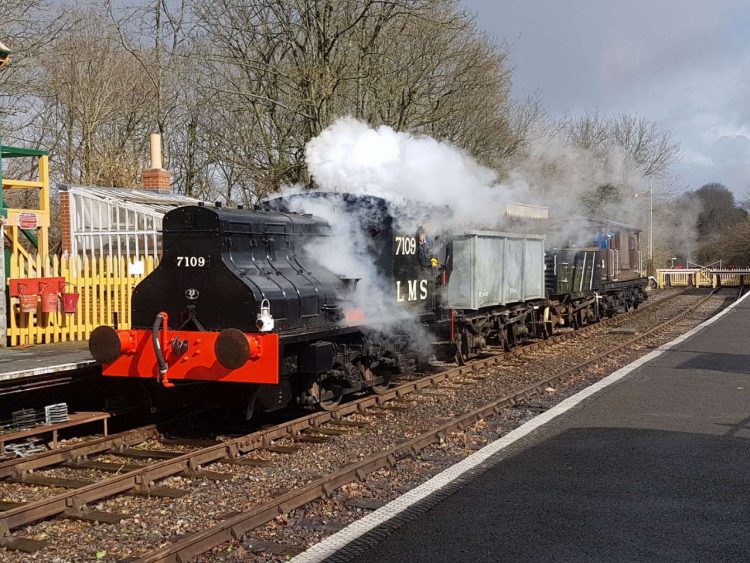 The Gloucestershire Warwickshire Steam Railway (GWSR) has announced the full line-up of locomotives for this year’s ‘Cotswold Festival of Steam’ will have the theme ‘Somerset & Dorset Remembered’.

On the Spring bank holiday weekend of Friday, 3rd to Sunday, 5th June, the railway expects to have nine locomotives in steam.

A variety of services will work to an intensive timetable over the 14-mile line, including double-heading, non-stop runs, demonstration freight trains, and shunting at Winchcombe station.

Visiting locomotives will include:

Resident locomotives in steam will be:

All locomotives are subject to availability.

A range of other attractions include displays; model railway; preservation society stands; beer tent, and refreshments. The Toddington Narrow Gauge Railway will be running, there will be ‘behind the scenes’ visits to Toddington locomotive works and Winchcombe Carriage & Wagon works; opportunities for footplate rides, and freight train brake-van rides.

Advance tickets are on sale at at the GWSR website and will also be available on the day.

Footplate rides will need to be booked in advance, while brake van rides will be offered on a first-come, first served basis during the event.

GWSR spokesman Ian Crowder commented: “This is shaping up to be an especially exciting and spectacular event after a two-year gap in our annual ‘Cotswold Festival of Steam’, thanks to the pandemic. The ‘Somerset & Dorset’ theme was planned for our 2020 Festival which, of course, had to be cancelled.

“Four of our five visiting engines were associated with the former Somerset & Dorset line, a challenging route over the Mendips between Bournemouth and Bath. This was a delightful and busy railway that provided direct (and the shortest) access to the South Coast from the Midlands via Somerset. It was heavily used by holiday traffic from the Midlands and North but fell victim to the infamous Beeching cuts of the 1960s. It is much missed – especially by those in the communities it once served.

“Our small organising team is hugely grateful to all of the owners for enabling their locomotives to visit the GWSR for this special event.”

Ian added that an additional feature will be the Bentley once owned by the late photographer, Ivo Peters. “During the latter years of the S&D many outstanding photographs of trains in the Mendips were taken by Ivo Peters. He often included his Bentley in the pictures he took. The car is now owned by Julian Birley BEM, and we are delighted that he is able to bring the car to the event.” Over the last weekend in July, the Gloucestershire Warwickshire Steam Railway is holding this year’s Heritage Diesel Gala.