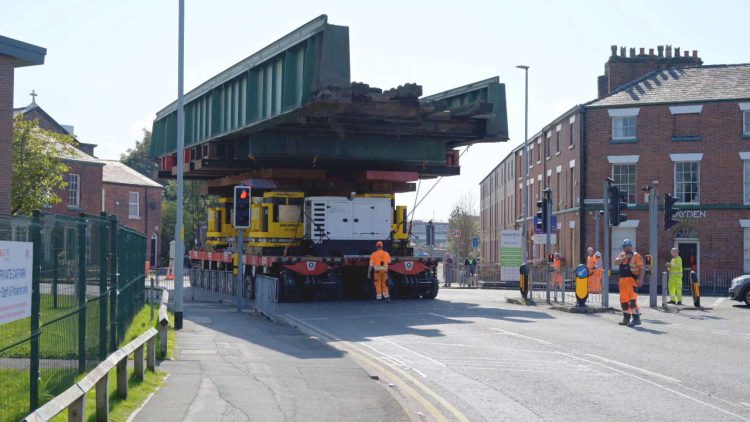 Whilst the line between Nuneaton and Leamington Spa is closed, rail-replacement bus services will be provided.

Network Rail is completely replacing the railway bridge over the A445 as part of a £2.4m investment to improve future journeys for passengers and freight between Nuneaton and Leamington Spa.

There is currently a 20 mph speed limit for trains because of the existing bridge’s condition, but when the new structure is installed, the speed limit can be raised meaning faster, more reliable journeys for passengers in time for Commonwealth Games events this summer.

During the closure, the existing 118-year-old bridge will be removed by a huge 96-wheeled transporter vehicle known as a self-propelled modular transporter (SPMT).

The bridge was originally built of stone around 1844 with a cast-iron deck. It was built to support two tracks and a platform for the northbound line to Milverton station, which closed in 1965. In 1904, the deck was replaced with the current construction and another southbound platform was built.

The new structure has been built in recent weeks at the nearby Potterton Sports Fields. It will be driven down the A445 and lifted into place before the railway reopens for trains on Tuesday 19 April.

The new bridge is a reinforced concrete ‘trough type’ construction, supported on precast reinforced concrete cill units on the existing cut down abutments. The deck will carry both railway tracks and incorporate worker walkways, and will provide a minimum headroom of 4.7m.

This video shows an animation that was created to ensure the bridge will fit when it’s driven along the A445 and lampposts and street signs have been temporarily removed.

Paul Randall, scheme project manager for Network Rail, said: “Replacing Rugby Road railway bridge is a complex engineering project and I’d like to thank residents and businesses in advance of this major work.

“There will be some disruption to rail and road travel during the £2.4m upgrade. That’s why we’re advising passengers to travel either side of the bank holiday weekend and to check National Rail Enquiries to plan their journeys in advance.”

“I would like to thank our customers for their patience while this major piece of engineering is carried out. Replacement buses will be in operation and I urge people to check their journeys before setting out.”

John Robson, CrossCountry regional director for West Midlands and the North West, said: “Investment in infrastructure such as this is really exciting as it helps to improve passengers’ journeys. I’d like to thank our customers for their support and patience and advise people to check their journeys before travelling.”