New exhibition celebrates memories of the Tyne and Wear Metro 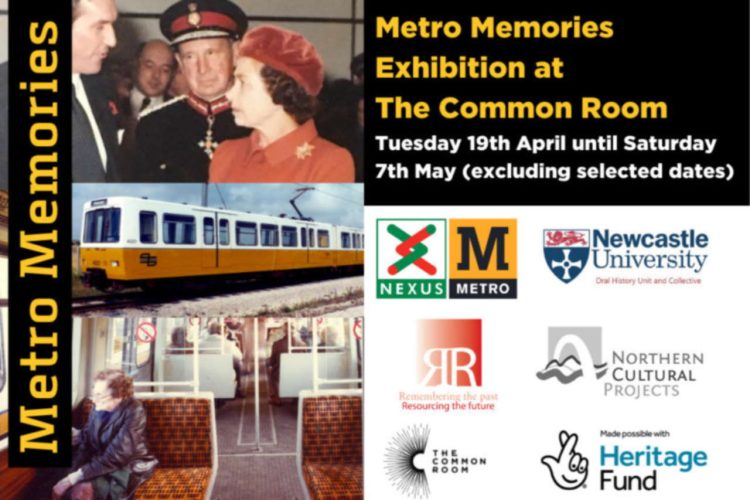 A new exhibition that celebrates the history of the Tyne and Wear Metro has opened in Newcastle.

The event, called Metro Memories, is being held at The Common Room in Westgate Road, Newcastle from Tuesday, 19th April until Saturday, 7th May. Opening times are from 10 am to 4 pm.

The exhibition will explore what Metro means to the people and the history of the region. It will feature photographs and film, and interviews with key decision-makers including politicians and director generals. There are also interviews with engineers, designers, and now-retired staff who helped make the project become a reality in the late 1970s.

Alongside the exhibition, The Common Room is hosting three, free family fun days from Thursday 21st until Saturday 23rd. These will offer lots of exciting Metro activities for all ages, including a Virtual Reality experience of Metro’s new fleet of trains, which Metro drivers themselves are currently using for training.

Throughout the exhibition period, three drop-in community events will be held at The Common Room. They are being hosted by Remembering the Past, Resourcing the Future’s team of memory collectors. Visitors will be able to share their own Metro memories or bring pieces of memorabilia to show and tell. Current and retired Metro staff, their families, and friends are especially welcome.

Nexus, the public body that owns and manages Metro, worked closely with The Common Room and Newcastle University’s Oral History Unit and Collective to bring the exhibition together as part of Metro’s 40th-anniversary celebrations.

Customer Services Director at Nexus, Huw Lewis, said: “We’re really excited to be able to put on this fantastic new exhibition celebrating the history and significance of the Tyne and Wear Metro.

“It provides a fascinating insight into this iconic transport system, which has transformed how people have been able to get around our region over the last 41 years.

“The team at Nexus, The Common Room, and Newcastle University Oral History Unit and Collective have put together some brilliant exhibits featuring film and photography from the archives, which visitors are going to enjoy, and we have had great input from staff and former employees who helped to build Metro in its early days.

“Metro is undoubtedly one of our region’s greatest post-war achievements. It’s a source of immense pride, and affection, and is the envy of other UK cities. We’re thrilled to be showcasing it.”

Chief Executive at The Common Room, Liz Mayes, said: “We’re thrilled to be able to share the history of the Metro through this exhibition, thanks to National Lottery Players and The National Lottery Heritage Fund.

“The Metro is such a significant part of daily North East life and important for our economy and skills development. This exhibition is a chance to celebrate that and think about the future role it will play.”

David Renwick, Director, England, North at The National Lottery Heritage Fund, said: “We are delighted to be able to support the exhibition exploring the heritage of the Metro thanks to money raised by National Lottery players. Not only does the exhibition showcase the fascinating history of the Metro, but the wider events will also serve to inspire the next generation of Metro staff who can continue the story into the future.”

The Metro Memories exhibition and associated events are free for all to attend, although visitors must book a free ticket in advance.

For more information and to book tickets, visit: https://thecommonroom.org.uk/programme/whats-on/