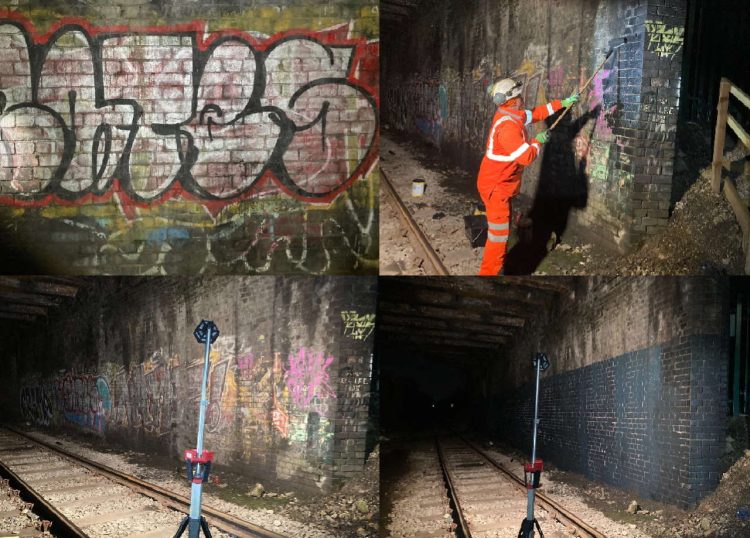 The additional £2m will see a heavy focus on the removal of graffiti which is a blight on the networks infrastructure.

The funding has been issued across Network Rail’s routes and will put right the rail infrastructure which has been defaced in hotspot areas.

“We have a wonderful and historic railway in Britain with engineering marvels spanning back to Victorian times, but all too often it is blighted by unsightly graffiti and vandalism which is an eyesore for our passengers and railway neighbours.

“Our teams have been working extremely hard to remove graffiti and to make the railway more inviting. This is no easy task and cannot be done overnight but I know that this investment will make a real difference to communities and our passengers across the country”

“A railway journey offers the chance to take some time out, sit back and enjoy the view. So, it’s a shame to have it spoilt by unsightly graffiti.

“I’ve asked Network Rail to tackle this problem and they are working hard to remove these eyesores, making our railways and surrounding areas more appealing and welcoming for all.”

Network Rail’s regional teams have pin pointed specific problem areas and funding has been used to send teams who can remove and repaint over the hard to remove spray painted tags whilst applying anti-graffiti paint where it is possible to do so in a bid to deter people from using the same areas in the future.

Over 450 sites have seen graffiti cleared over the southeast, including high-profile sites such as Hungerford Bridge and the Bermondsey dive-under in London.

Bristol and Keynsham have also seen heavily tagged infrastructure and are amongst dozens of other locations which have been the targets throughout the southwest.

The West Midlands has seen the creation of a graffiti hit squad which has been in action for almost a year in an attempt to improve the railway ahead of the Birmingham 2022 Commonwealth Games.

The squad have removed thousands of tags across the region and more recently on routes in and out of Birmingham New Street station in the Stechford and Sutton Park areas alongside railway-owned walls and buildings in the city centre.

The East Midlands has seen the removal of graffiti on a footbridge making for a more pleasant route across the railway for locals. Tags have also been removed by Network Rail’s graffiti-hit-squads across Manchester, Liverpool and Leeds with a special focus on Burley Park station and through Ashton Road Tunnel in Wigan.

Graffiti creates a costly and dangerous problem for the railway with the costs of removal being substantial, however, the risk for those trespassing on the railway offer tragic consequences or life-changing injuries for those taking part in this illicit activity.

To report people vandalising the railway or behaving suspiciously, please get in touch with the British Transport Police via text on 61016 or by phoning 0800 40 50 40.