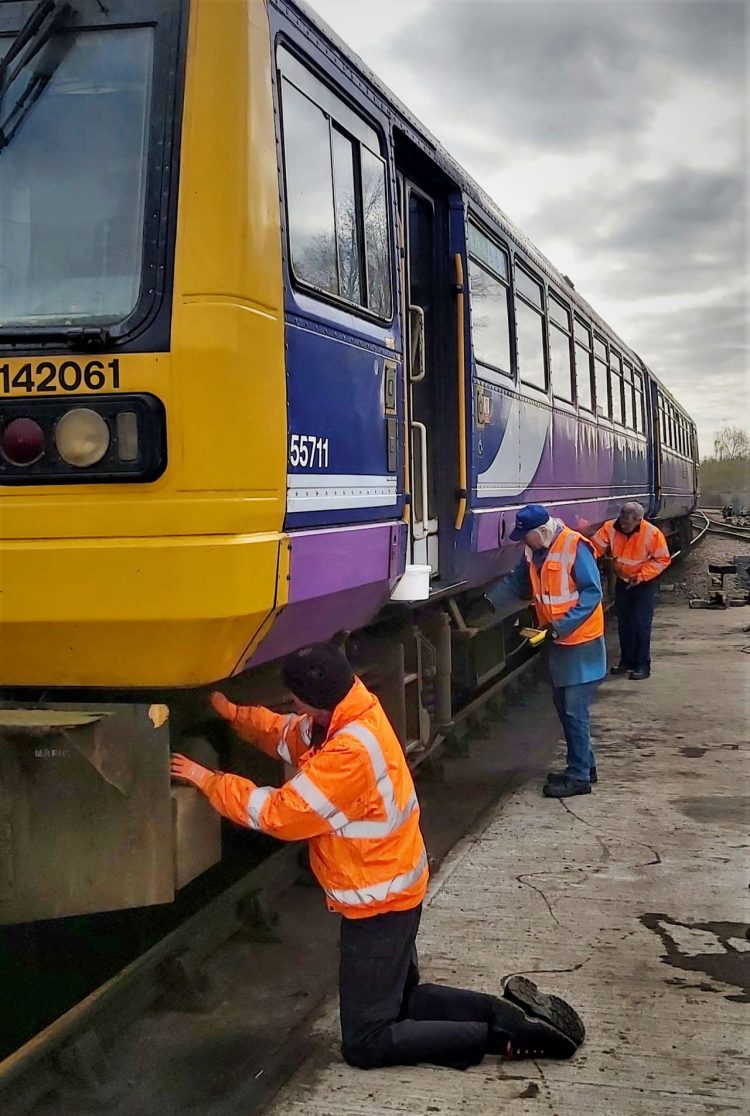 The team are busy preparing coaches whilst also carrying out the first stage of refurbishment of a Pacer.

The Class 142 Pacer undergoing the refurb is unit 142061, which has already seen deep cleaning to the interior with extra focus on the seating and floor.

The seat frames have also been stripped and treated for rust before being repainted. The floors have seen extreme deep cleaning to remove the decades of dirt.

The refurbishment has also seen the door lights in the foot-wells stripped, a rust treatment applied before being painted and followed by the installation of new lights. The exterior of the pacer has been cleaned and repainted so that it is ready for action for the Mid Norfolk Railways running season.

Colin Makcrow, one of the heritage railways’ Joint Rolling Stock and Traction Managers, has supervised some of the railways working members during the Pacers make-over so far.

The Mid Norfolk Railway has plans to paint at least one of their Pacers in a different livery in the future but will come after work on coaches are complete. The railway’s Class 101 unit which is currently out of service and requires a number of jobs to be carried out ahead of a repaint which will mark a final step before its return to service and has been prioritised ahead of the Pacer Units receiving a new livery.

As well as working on the Pacer, Colin Makcrow and Tony Dunford who is the partner Joint Rolling Stock and Traction Manager, have undertaken the annual inspection for all of the Mark 1 and 2 coaches which make up the railway’s operational vacuum braked coaches. The coaches have also undergone a deep clean with minor interior repairs carried out.

Tony Dunford has overseen working members of the railway work on the ongoing refurbishment of the railway’s MK1 FK M13225 so it can be ready for its launch later in the season and moving into service following that and marks the railway’s most extensive restoration attempted.

The heritage railway is set to open to the public and will see a steam service operating over the May Bank holiday weekend with services available on Saturday the 30th of April, Sunday the 1st and Monday the 2nd of May with the railway continuing its popular kids go free promotion over the three days.

Tickets can be purchased on the day or can be booked ahead via the Mid Norfolk Railway Website: https://www.midnorfolkrailway.co.uk

Train services to Ebbw Vale subject to disruption this Easter Norfolk Broads swing bridges to be upgraded this autumn

Network Rail is to upgrade three swing bridges in the Norfolk Broads to improve reliability for passengers.