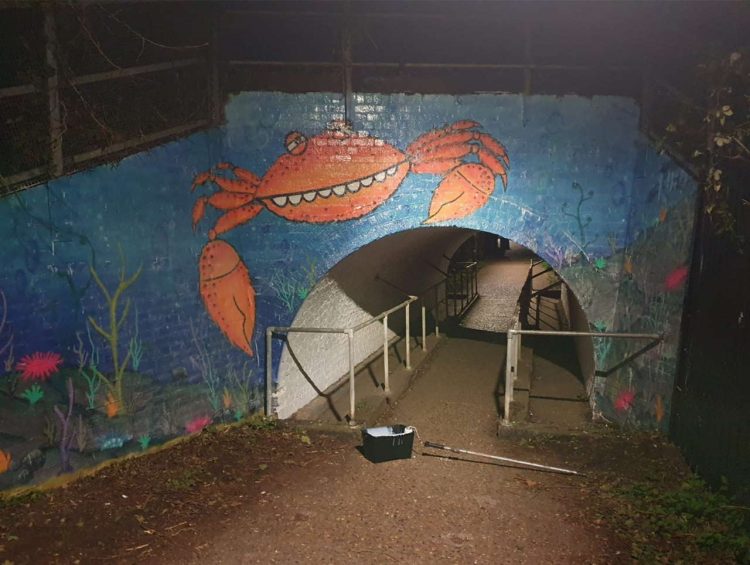 Network Rail teams across the country have been removing graffiti to freshen up Britain’s railway in the Queen’s Platinum Jubilee year.

Over £2m of funding has been allocated for the removal of the graffiti. Network Rail’s regional teams identified problem areas and used the funding to remove spray-painted tags and, where possible, applied anti-graffiti paint to deter people from targeting the same areas again.

Graffiti has been cleared from more than 450 sites in the South East, including high-profile sites such as Hungerford Bridge outside Charing Cross, and the Bermondsey dive-under.

Network Rail has cleared 196 sites in Kent with another five planned on tracks from Charing Cross, Victoria, and London Bridge, into South East London and Kent via Dartford, Sevenoaks, and Sidcup.

Thousands of metres of graffiti has been cleared from the Kent route this year and Network Rail is working with the British Transport Police to stop the problems before they start. A team working in Crayford, South East London, recently arrested three people suspected of being connected to a high profile tag. Up until the arrests, there were 80 attacks in the area, but since then – nothing.

Network Rail is also working in partnership with Canterbury City Council’s graffiti team, with the results including a mural painted in Stream Walk, Whitstable, at a site previously well-coated in tags.

On the Sussex route, 110 sites have been tackled with another seven planned on tracks from Victoria and London Bridge to South London and East/West Sussex, via East Croydon and Norwood Junction.

On the Wessex route, which covers all tracks from Waterloo to Hampshire, Surrey, and onwards, 153 sites have been tackled with another four planned. Sites cleared on the Wessex route included the classic 1930s building at Chessington South.

Network Rail chief executive, Andrew Haines, said: “We have a wonderful and historic railway in Britain with engineering marvels spanning back to Victorian times, but all too often it is blighted by unsightly graffiti and vandalism which is an eyesore for our passengers and railway neighbours.

“Our teams have been working extremely hard to remove graffiti and to make the railway more inviting. This is no easy task and cannot be done overnight but I know that this investment will make a real difference to communities and our passengers across the country”

Transport Secretary, Grant Shapps, said: “Everyone should feel safe and comfortable when travelling on our railways and graffiti isn’t just a criminal offence or eyesore, it can also lead to passengers feeling that railways are unkept or a slightly dangerous way to travel.

“I’ve asked Network Rail to tackle this problem so passengers can travel safely and enjoy their journey and the views our railways offer.”

To report people vandalising the railway or acting suspiciously, contact the British Transport Police via text on 61016 or by phoning 0800 40 50 40.

Northern maps out locations of blue plaques across its network