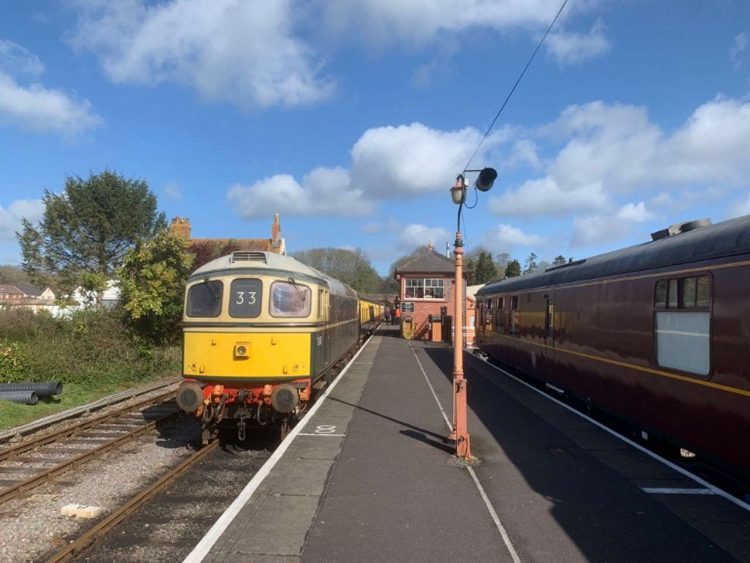 The West Somerset Railway (WSR) is being made available to contractors to simulate “real world” conditions to allow testing of new equipment without impacting services on main lines.

Testing new equipment on the main line has become increasingly difficult as companies run more frequent and faster train services. Over recent years, it has become more and more challenging for contractors to schedule test runs.

Use of the WSR on days when normal services are not scheduled provides an ideal opportunity for contractors to use it for test purposes.

Having complete control over test trains by the contractor can enable good control of the experimental environment. In a recent set of tests, the WSR provided a test train of coaches on which experimental equipment was carried which shuttled between Bishops Lydeard and Crowcombe Heathfield.

The contractor reserved two days of train operation on the WSR. On the first day, the contractor’s technical staff installed and tested equipment to ensure everything was working as expected, then three weeks later, various key industry managers and potential customers attended a further demonstration of the new equipment.

This is a growing activity for the WSR as the main line junction at Norton Fitzwarren makes it relatively easy for potential contractors to access the railway with rail vehicles. For much of the year, the railway is not in use by heritage railway passenger trains every single day, so the availability of the line can be an attractive factor for mainline companies wishing to test equipment or vehicles.

One contractor who has used the WSR is Thales, who worked with Network Rail and the WSR to run a live demonstration of its Train Protection and Warning System – Continuous Supervision (TPWS-CS). Representatives from Network Rail, RAIB, ORR, supply chain, train operating companies, and rolling stock owners observe the digital, in-cab system put through its paces in real-world scenarios on 7th April.

TPWS-CS initially warns the driver if the train is approaching a track possession, an area of track taken over by a maintenance crew with restricted access or speed limit. If the train is in danger of breaching its movement authority, the system automatically applies a brake. The system allows controllers to set movement rules around a possession, either a 0 mph rule at the boundary or allowing specified trains. such as an engineering train, to enter to a certain extent and at a fixed maximum speed.

Alex Stockill, Product Line Manager at Thales, said: “This is a proof-of-concept demonstration, to show that this is something that exists, not an unrealistic idea. When we tell engineers what we plan to do, their reaction is that it’s too good to be true but this demo will show that the technology does exist and it works.”

“We want to come out of the demonstration with the confidence of Network Rail and other potential customers. We think this system, if deployed across the UK, can make a big difference.”

“It’s been really good working with WSR,” said Alex. “They’ve also given us access to their track so we could carry out testing in safe conditions.

“It’s taken very little time to arrange because they are in total control of their own track, so we’ve been able to react quickly and collaboratively with them.” Fly-tippers in the Deepdale area of Preston to face criminal consequences in a bid to stop waste being...