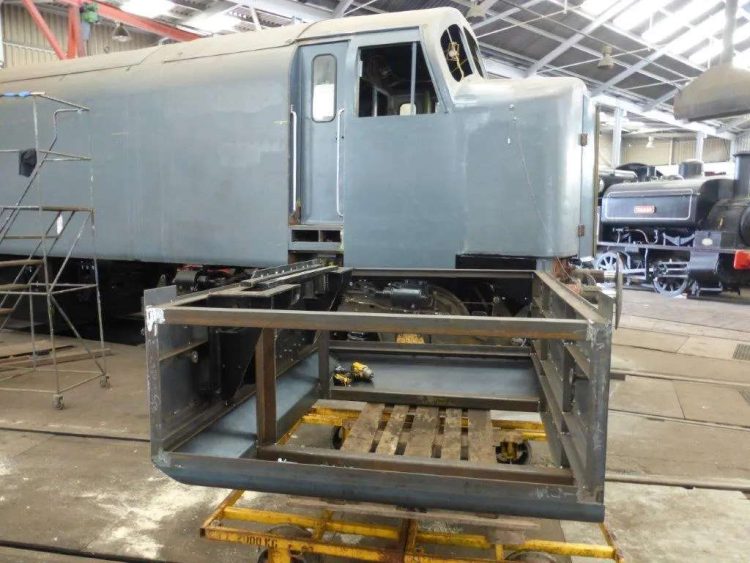 Since the March Project Update, the dummy CWA tank has been completed. Illustrated in this month’s sequence of photos is the final assembly of the tank. Details of its installation will be included in the next Project Update.

In the photograph below, the tank has been removed from the loco where it was temporarily mounted to ensure that the assembly remained tight to the mountings and didn’t move during welding. It is on a PW trolley to allow access to the mountings on the end plates.

Next, the inner end bracket can be seen fully-welded to the end plate. This was taken before the paint spoils the view of all the welds. Note that the three middle holes in the bracket have had nuts ‘trapped’ on top because once the tank is installed, they are almost impossible to reach from the top. Although it is not best practice to insert bolts from below, in this case it is unavoidable should there ever be a need to remove the assembly again in the future.

The photo below shows the final stages of welding on the outer end of the tank, the inside framework was fully-welded together, the frame was stitched to the platework on a 25/75 basis, and the bracket was fully welded to the platework with three runs and a capping run. Following this process ensures the total integrity of the tank.

The final photo shows the tank next to the loco just after it was removed. At this point, the end bracket was only tacked on, which can just be seen by looking closely at the photo. Once the buffer cowls have been added the appearance of front of the loco will be transformed.

To find out more about the project and how you can help,  visit the Baby Deltic Project website here

Transport for London announces a major milestone for the project as two Northern line trains use the new tunnels of The Bank branch.